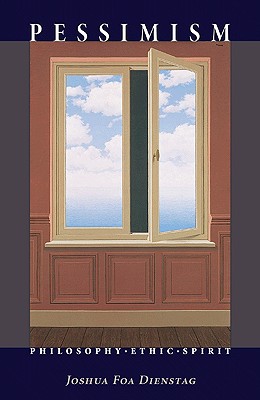 Pessimism claims an impressive following--from Rousseau, Schopenhauer, and Nietzsche, to Freud, Camus, and Foucault. Yet "pessimist" remains a term of abuse--an accusation of a bad attitude--or the diagnosis of an unhappy psychological state. Pessimism is thought of as an exclusively negative stance that inevitably leads to resignation or despair. Even when pessimism looks like utter truth, we are told that it makes the worst of a bad situation. Bad for the individual, worse for the species--who would actually counsel pessimism?

Joshua Foa Dienstag does. In Pessimism, he challenges the received wisdom about pessimism, arguing that there is an unrecognized yet coherent and vibrant pessimistic philosophical tradition. More than that, he argues that pessimistic thought may provide a critically needed alternative to the increasingly untenable progressivist ideas that have dominated thinking about politics throughout the modern period. Laying out powerful grounds for pessimism's claim that progress is not an enduring feature of human history, Dienstag argues that political theory must begin from this predicament. He persuasively shows that pessimism has been--and can again be--an energizing and even liberating philosophy, an ethic of radical possibility and not just a criticism of faith. The goal--of both the pessimistic spirit and of this fascinating account of pessimism--is not to depress us, but to edify us about our condition and to fortify us for life in a disordered and disenchanted universe.
Joshua Foa Dienstag is Professor of Political Science at the University of California, Los Angeles. He is the author of Dancing in Chains: Narrative and Memory in Political Theory.