Cloudy With a Chance of Meatballs (Paperback) 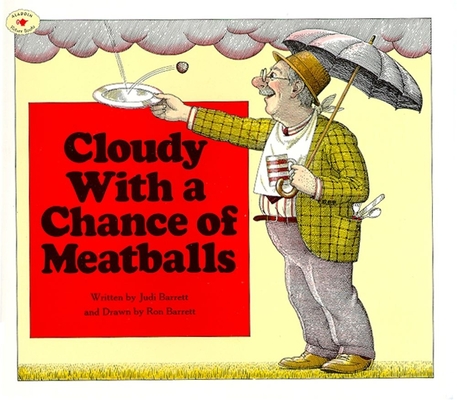 Cloudy With a Chance of Meatballs (Paperback)


Usually Ships in 1-5 Days
An imaginative story of amazing food weather that inspired the hit movie, Cloudy with a Chance of Meatballs is a favorite of grown-ups and children everywhere.

The tiny town of Chewandswallow was very much like any other tiny town—except for its weather which came three times a day, at breakfast, lunch, and dinner.

Life for the townspeople was delicious until the weather took a turn for the worse. The food got larger and larger and so did the portions. Chewandswallow was plagued by damaging floods and storms of huge food. The town was a mess and the people feared for their lives.

Something had to be done, and in a hurry.
Judi Barrett is the author of many beloved books for children, including the bestselling Cloudy With a Chance of Meatballs, Pickles to Pittsburgh, Animals Should Definitely Not Wear Clothing, Lots More Animals Should Definitely Not Wear Clothing, Santa from Cincinnati, and An Excessive Alphabet. She teaches art to kindergarten students at a school in her Brooklyn neighborhood.

Ron Barrett is the internationally bestselling illustrator of many books for children, including Cloudy With a Chance of Meatballs, Pickles to Pittsburgh, Superhero Joe, Animals Should Definitely Not Wear Clothing, Lots More Animals Should Definitely Not Wear Clothing, and An Excessive Alphabet. His illustrations have been honored by the Society of Illustrators and have been exhibited at The Louvre in Paris. He lives in New York City.