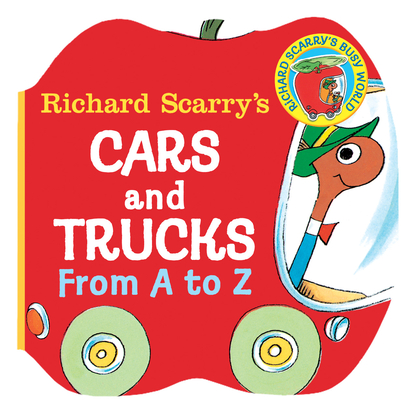 
Difficult to Find
Illustrated in full color. This car-and- truck-filled alphabet extravaganza that starts with an ambulance and ends with a zippercar, is shaped like Lowly Worm's applemobile.
Richard Scarry is one of the world's best-loved children's authors EVER! Generations of children all over the world have grown up spending hours pouring over his books filled with all the colorful details of their daily lives. No other illustrator has shown such a lively interest in the words and concepts of early childhood. Whenever he was asked how old he was, Scarry would always put up one hand and laugh, saying, "five!"

In his extraordinary career, Richard Scarry illustrated over 150 books, many of which have never been out of print. His books have sold over 100 million copies around the world, and are currently published in over twenty languages. Richard Scarry's son, Huck, carries on his
father's work today. Richard Scarry was posthumously awarded a Lifetime Achievement Award from The Society of Illustrators in 2012.