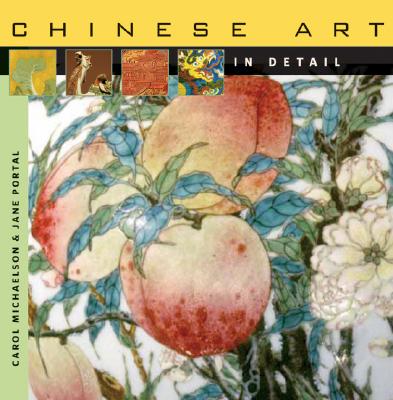 For many Westerners, the words "Chinese art" evoke visions of willow pattern landscapes on porcelain plates and teapots, Chinese wallpaper decorated with flowers, birds, and pagodas, and perhaps silk brocades. This beautiful book allows readers to see beyond such ornamental exports to the true nature of the art produced in China over millennia for a Chinese audience, whether the Emperor, the scholarly elite, the ordinary folk, or the furnishing of tombs and temples.

Drawing on the British Museum's extensive collection, Chinese Art in Detail explores the traditional hierarchy of materials and techniques reaching back as far as the Han Dynasty in the third century B.C.--with calligraphy and painting most revered, followed by jades and bronzes, decorative arts such as lacquer, porcelain, and silk, and, finally, sculpture for religious and funerary use. Images of complete artifacts set against magnified details give readers the rare opportunity to appreciate the delicacies of technique and material that characterize much of Chinese art--and distinguish one form, as well as one period, from another. Illuminated throughout by two scholars thoroughly and deeply versed in the history and character of the works under scrutiny, this sumptuously illustrated book conveys an understanding of Chinese art in all its great variety, its simplicities, its complexities, its splendors, and its mysteries of craft and inspiration reaching back to Neolithic times.