They Were Strong and Good (Hardcover) 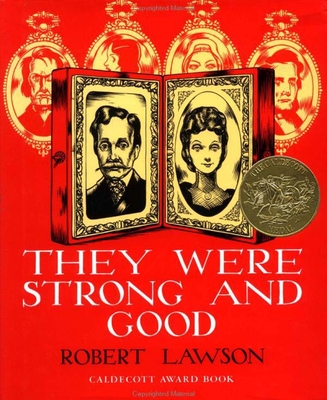 They Were Strong and Good (Hardcover)

By Robert Lawson
List Price: $18.99
Our Price: $17.09
(Save: $1.90 10%)
Usually Ships in 1-5 Days
Awarded the Caldecott Medal in 1941, They Were Strong and Good is a classic book that follows the path of one family’s journey through American history. Robert Lawson introduces us to his forefathers and with them we brave Caribbean storms, travel to the wharf markets of New York, and fight in the Civil War. Amidst these adventures Lawson’s grandparents meet, marry, and raise a family, and later his parents follow the same cycle of life. But this book is more than just the story of one family, it’s a social history of our country. It reminds us to be proud of our ancestors—who they were, what they did, and the effect that they had on the nation we live in today.

None of them were great or famous, but they were strong and good. They worked hard and had many children. They all helped to make the United States the great nation that it now is. Let us be proud of them and guard well the heritage they have left us.

Robert Lawson (1892-1957) received his art training at the New York School of Fine and Applied Arts. His favorite medium, pen and ink, is used expressively and with detail in his black and white illustrations in The Story of Ferdinand (by Munro Leaf). In addition to illustrating many children's books, including Mr. Popper's Penguins, Robert Lawson also wrote and illustrated a number of his own books for children. In 1940, he was awarded the Caldecott Medal for his picture book illustrations in They Were Strong and Good and in 1944, he was awarded the Newbery Medal for his middle grade novel Rabbit Hill.