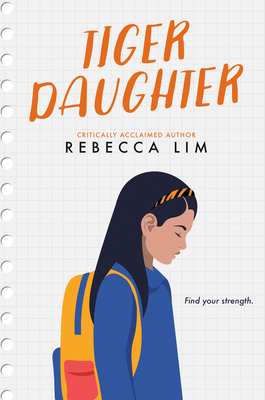 
Coming Soon - Available for Pre-Order Now
Equal parts heartbreaking and hopeful, Tiger Daughter is an award-winning novel about finding your voice amidst the pressures of growing up in an immigrant home told from the perspective of a remarkable young Chinese girl.

Wen Zhou is a first-generation daughter of Chinese migrant parents. She has high expectations from her parents to succeed in school, especially her father whose strict rules leave her feeling trapped. She dreams of creating a future for herself more satisfying than the one her parents expect her to lead.

Then she befriends a boy named Henry who is also a first generation immigrant. He is the smartest boy at school despite struggling with his English and understands her in a way nobody has lately. Both of them dream of escaping and together they come up with a plan to take an entrance exam for a selective school far from home.

But when tragedy strikes, it will take all of Wen’s resilience and tiger strength to get herself and Henry through the storm that follows.

Tiger Daughter is a coming-of-age novel that will grab hold of you and not let go.
Rebecca Lim is the author of the award-winning novel Tiger Daughter. In Australia, it won both the CBCA Book of the Year and People's Choice at the Victorian Premier's Literary Awards. As the author of over twenty books, her work has also been longlisted for the Davitt Award for YA, the Gold Inky Award, the David Gemmell Legend Award, and hornored as an Aurealis Awards finalist. She lives in Melbourne Australia.
“What a powerful read! Heartbreaking and ultimately uplifting, Wen and Henry are characters you can't help but care deeply about. A beautiful emotional story that hits hard and deep and will leave readers thinking about it for a very long time."—Ellen Oh, author of Finding Junie Kim