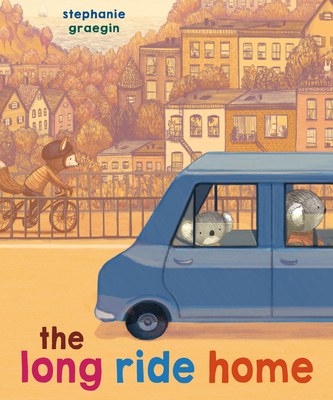 Little Koala has a long ride home, and every place her mother passes invokes a memory of her best friend: the ice cream shop where they giggled uncontrollably; the hill in the park where they crashed their bikes (that memory also lives on as a little scar on Koala’s knee), the library where they borrowed their favorite book again and again.

Koala’s friendship blooms beautifully on the page, seamlessly interwoven with the ride home, and soon we learn just why these memories are so important: Koala’s friend has moved away. The story ends on a lovely note of hope: Koala and her friend are still close, despite the distance.

The Long Ride Home is a universal and broadly appealing friendship story that explores the power of memory with tenderness, warmth, and heart. Stephanie Graegin expertly balances the bittersweet sensations of cherishing a moment long past with artwork that is rendered in soft, sepia hues in a way that only she can.


Stephanie Graegin is the author and illustrator of Fern and Otto, A Story About Two Best Friends and Little Fox in the Forest which garnered four starred reviews and appeared on many Best of the Year lists. She is also the illustrator of several books for children, including You Were the First by Patricia MacLachlan; The Lost Gift by Kallie George; Water in the Park by Emily Jenkins, which received three starred reviews; and Peace Is an Offering by Annette LeBox. Stephanie lives in Brooklyn, New York. Visit her at graegin.com.