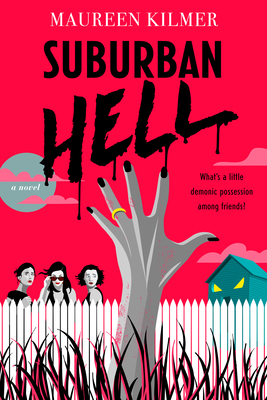 Amy Foster considers herself lucky. After she left the city and moved to the suburbs, she found her place quickly with neighbors Liz, Jess, and Melissa, snarking together from the outskirts of the PTA crowd. One night during their monthly wine get-together, the crew concoct a plan for a clubhouse She Shed in Liz’s backyard—a space for just them, no spouses or kids allowed.

But the night after they christen the She Shed, things start to feel . . . off. They didn’t expect Liz’s little home-improvement project to release a demonic force that turns their quiet enclave into something out of a nightmare. And that’s before the homeowners’ association gets wind of it.

Even the calmest moms can’t justify the strange burn marks, self-moving dolls, and horrible smells surrounding their possessed friend, Liz. Together, Amy, Jess, and Melissa must fight the evil spirit to save Liz and the neighborhood . . . before the suburbs go completely to hell.

Maureen Kilmer graduated from Miami University in Oxford, Ohio, and lives in the Chicago suburbs with her husband and three children. She does not have a She Shed, and thankfully has not had to battle the forces of darkness (unless going to Costco on a Saturday counts). Suburban Hell is her horror debut.

"This delightful fiction debut is the hell-arious Desperate Housewives-esque novel that dreams are made of." —Buzzfeed

"A delightful, fun, spooky, scary story. At it’s core it’s about friendship and the bonds of love for these four women. Maureen has hit a home-run with her first novel." —Red Carpet Crash

"This novel about the horrors of suburbia—both supernatural and terrestrial in origin—has plenty of genuinely funny moments. . . . A good fit for fans of Grady Hendrix's My Best Friend's Exorcism, Rachel Harrison's The Return, or Junji Ito's horror manga Uzumaki." —Booklist

"Maureen Kilmer strikes the perfect balance in Suburban Hell. This is a scary, thrilling, and funny ride through a neighborhood nightmare. The pages turn themselves, you can’t stop reading this one." —Samantha Downing, author of For Your Own Good

"A savvy, wildly relatable horror-comedy about suburban angst and the bonds of friendship, that serves chilling scares and genuine laughs. Massively entertaining and fun as hell!" —Rachel Harrison, author of Such Sharp Teeth