So Much Snow (Hardcover) 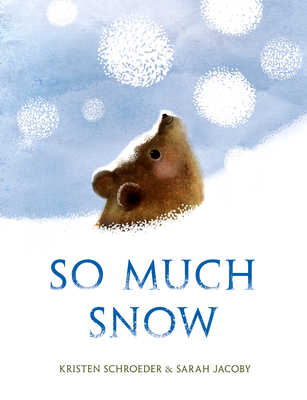 So Much Snow (Hardcover)


Usually Ships in 1-5 Days
A beautifully illustrated, rollicking read-aloud about forest animals who are caught—literally up to their ears and antlers—in a snowstorm.

On Monday, it starts to snow.
Silent swirling.
How high will it go?

Follow seven forest creatures, from a tiny mouse to a giant moose, as they hunker down in a snowstorm. As the week progresses, the snow piles up and up--even past Moose's antlers!

On Sunday, the sun starts to melt the snow, and it seems that, as the next week passes and it grows sunnier, spring has finally sprung. But wait...is that more snow?! This cumulative picture book is at once beautiful and lyrical and playful and joyful, with charming illustrations by a highly acclaimed illustrator.
Kristen Schroeder is the author of Alien Tomato, deemed "destined to become a read-aloud favorite" by School Library Journal. In addition to writing, she owns and manages her own business. Find her at kristenschroederbooks.com or on Twitter at @KLSchroed.

Sarah Jacoby’s illustrations have won awards from the Society of Illustrators (Gold Medal), Creative Quarterly, American Illustration, and Communication Arts. She is the author and illustrator of Forever or a Day, called "elegant" by the New York Times and named an NPR Best Book of the Year. She is also the illustrator of The Important Thing About Margaret Wise Brown by Mac Barnett, which received six starred reviews, and The Rabbit and the Motorbike by Kate Hoefler, which earned four starred reviews, among others. You can learn more about Sarah at thesarahjacoby.com or on Instagram at @sjacobee.

★ "Playful and full of wonder, this is an ideal pick for a seasonal storytime that celebrates wintertime joy." -The Bulletin, starred review

"So Much Snow is so much joy." -BookPage