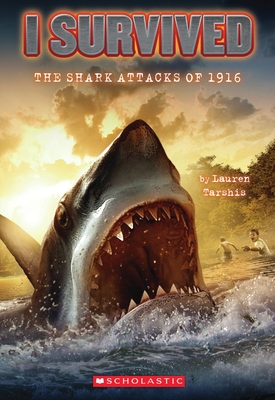 This is book number 2 in the I Survived series.

Based on true events! It's the summer of 1916 and the Jersey shore is being terrorized by a Great White shark. Can 10-year-old Chet and his friends survive a swim in the local creek?Chet Roscow is finally feeling at home in Elm Hills, New Jersey. He has a job with his uncle Jerry at the local diner, three great friends, and the perfect summertime destination: cool, refreshing Matawan Creek.But Chet's summer is interrupted by shocking news. A great white shark has been attacking swimmers along the Jersey shore, not far from Elm Hills. Everyone in town is talking about it. So when Chet sees something in the creek, he's sure it's his imagination. . . until he comes face-to-face with a bloodthirsty shark!
Lauren Tarshis's New York Times bestselling I Survived series tells stories of young people and their resilience and strength in the midst of unimaginable disasters and times of turmoil. Lauren has brought her signature warmth and exhaustive research to topics such as the battle of D-Day, the American Revolution, Hurricane Katrina, the bombing of Pearl Harbor, and other world events. She lives in Connecticut with her family, and can be found online at laurentarshis.com.