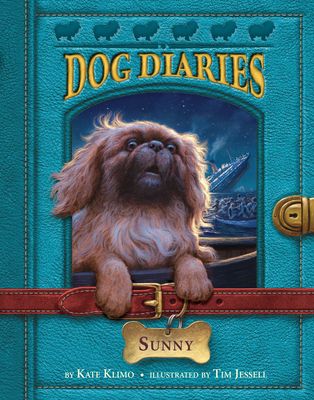 This is book number 14 in the Dog Diaries series.

Fans of dog stories and the RMS Titanic, take note! This new entry in the Dog Diaries series—based on a true story—is narrated by a pampered Peke that survived the fateful voyage!

Sun Yat-Sen—aka Sunny—enjoys the finer things in life. Noble canine companion to globe-trotters Henry and Myra Harper, Sunny doesn't even like to walk, preferring instead to be carried! Sunny and the Harpers are traveling on the maiden voyage of the RMS Titanic—the biggest, finest ship in the world. So imagine Sunny's horror when he learns he must stay in the Titanic's kennel with eleven other dogs, not in the Harpers' luxurious stateroom! It's . . . unthinkable! But only four days into the voyage, Sunny learns the true meaning of tragedy when, hidden inside Myra's fur coat, he escapes the sinking ship in a lifeboat.

Based on a true story, with realistic black-and-white illustrations throughout and a fact-filled appendix that includes information about the RMS Titanic, Pekingese dogs, and more, this is historical fiction for middle graders who don't realize they like historical fiction!
KATE KLIMO is the author of many books for young readers, including the Dragon Keepers series and all the books in the Dog Diaries series. She lives in New Paltz with her husband and two horses, Harry and Fancy. Over the years, she has served as companion to eight dogs: Pal, Beauregard, Fred, Kelly, Bear, Rascal, Dobey, and George W. Currently, she is searching for a furever friend that gets along well with horses. To learn more about her and her work, visit kateklimoauthor.com.

TIM JESSELL is an award-winning illustrator whose work has appeared in numerous children's books. He is the illustrator of all the books in the Dog Diaries series. Check out his work at timjessell.com.