The Longest Silence: A Life in Fishing (Paperback) 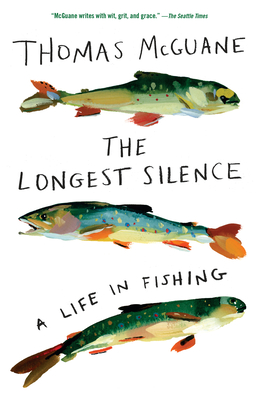 The Longest Silence: A Life in Fishing (Paperback)

By Thomas McGuane
List Price: $17.00
Our Price: $15.30
(Save: $1.70 10%)
Usually Ships in 1-5 Days
From the highly acclaimed author of Ninety-two in the Shade and Cloudbursts comes a collection of alternately playful and exquisite essays—including seven collected here for the first time—borne of a lifetime spent fishing.

"Thomas McGuane writes about fishing better than anyone else in the history of mankind." —Jim Harrison, New York Times bestselling author of Legends of the Fall

The forty extraordinary pieces in The Longest Silence take the reader from the tarpon of Florida to the salmon of Iceland, from the bonefish of Mexico to the trout of Montana. They introduce characters as varied as a highly literate Canadian frontiersman and a devoutly Mormon river guide and address issues ranging from the esoteric art of tying flies to the enduring philosophy of a seventeenth-century angler to the trials of the aging fisherman.

Both reverent and hilarious by turns, and infused with a deep experience of wildlife and the outdoors, The Longest Silence sets the heart pounding for a glimpse of moving water and demonstrates what dedication to sport reveals about life.
THOMAS McGUANE lives on a ranch in McLeod, Montana. He is the author of ten novels, including the National Book Award-nominated Ninety-two in the Shade, three works of nonfiction, and four collections of stories. His work has won numerous awards, including the Rosenthal Award of the American Academy and Institute of Arts and Letters, and has been anthologized in the Best American Stories, Best American Essays, and Best American Sporting Essays.

"McGuane writes with wit, grit, and grace; the result is a book as entertaining as any you will find on any subject." —The Seattle Times

"A wonderful writer at the top of his form." —David Halberstam

"Entertaining as well as technical... he gentle, elegiac descriptions laced with crisp opinion ... draw the reader in." —The New York Times

"His words are as fresh as the morning dew on an angler's line." —Chicago Sun-Times

"Thomas McGuane writes about fishing better than anyone else in the history of mankind." —Jim Harrison

"It's vintage McGuane, the prose elegant and erudite." —The Denver Post

"A meaty book, and an uplifiting one, dazzlingly well-written.... As compelling a testimony to the power and mystery of obsession as I have ever read." —Tom Fort, Financial Times

"Certain to entertain fellow enthusiasts and fans of his writing.... McGuane casts not only his fishing line, but also his magic at turning a precise phrase and evoking a delightful image." —Publishers Weekly (starred review)

"Readers will feel the strong, cold currents of fish-infested rivers at their legs." —Booklist