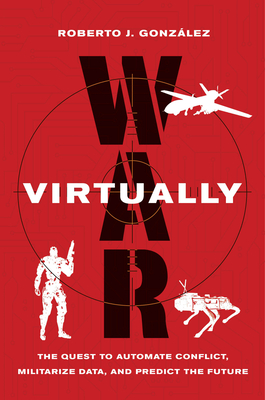 
Usually Ships in 1-5 Days
A critical look at how the US military is weaponizing technology and data for new kinds of warfare—and why we must resist.

War Virtually is the story of how scientists, programmers, and engineers are racing to develop data-driven technologies for fighting virtual wars, both at home and abroad. In this landmark book, Roberto J. González gives us a lucid and gripping account of what lies behind the autonomous weapons, robotic systems, predictive modeling software, advanced surveillance programs, and psyops techniques that are transforming the nature of military conflict. González, a cultural anthropologist, takes a critical approach to the techno-utopian view of these advancements and their dubious promise of a less deadly and more efficient warfare.
With clear, accessible prose, this book exposes the high-tech underpinnings of contemporary military operations—and the cultural assumptions they're built on. Chapters cover automated battlefield robotics; social scientists' involvement in experimental defense research; the blurred line between political consulting and propaganda in the internet era; and the military's use of big data to craft new counterinsurgency methods based on predicting conflict. González also lays bare the processes by which the Pentagon and US intelligence agencies have quietly joined forces with Big Tech, raising an alarming prospect: that someday Google, Amazon, and other Silicon Valley firms might merge with some of the world's biggest defense contractors. War Virtually takes an unflinching look at an algorithmic future—where new military technologies threaten democratic governance and human survival.
Roberto J. González is Professor and Chair of the San José State University Anthropology Department. He has authored four books including Connected: How a Mexican Village Built Its Own Cell Phone Network and Militarizing Culture: Essays on the Warfare State.

"The topics addressed by Roberto González in War Virtually ought to concern us all."
— Science

"González shows how surveillance thrives less on the machinations of evil men than on the pedestrian facts of political economy. . . . He scaffolds his analysis with character sketches of the social scientists, career generals, and Silicon Valley CEOs driving the development of virtual warfare."
— Boston Review

"War Virtually overall paints the picture of a strong entanglement between the Defense Department and Silicon Valley. . . The details reveal the absurdity and megalomania that characterize aspects of virtual war. . . . A great piece of well-founded scholarship."
— Public Anthropologist