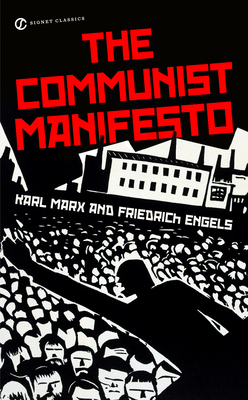 
Usually Ships in 1-5 Days
Featuring an extensive, provocative introduction by historian Martin Malia, this authorized English translation of The Communist Manifesto, edited and annotated by Engels, with prefaces to editions published between 1872 and 1888, provides a new opportunity to examine the document that shook the world.

In 1848, two young men published what would become one of the defining documents of modern history, The Communist Manifesto. It rapidly realigned political faultlines all over the world and its aftershock resonates to this day. In the many years since its publication, no other social program has inspired such divisive and violent debate. Ever since the collapse of the Soviet Union, the world’s first regime to adopt the Manifesto’s tenets, historians have debated its intent and its impact. In the current era of market democracy in Russia and Eastern Europe, nationalism on every continent, and an ever tightening global economy, does the specter of Communism still haunt the world? Were the seeds of Communism’s ultimate destruction already planted in 1848? Is there anything to be learned from Marx’s envisioned utopia?

With an Introduction by Martin Malia
and an Afterword by Stephen Kotkin
Karl Marx (1818-1883) was born in Trier to a German Jewish family that had converted to Christianity. As a student he was influenced by Hegel’s dialectical philosophy but later reacted against his mentor’s idealism and turned instead to the then new socialist movement. The Communist Manifesto (utilizing drafts by his friend Friedrich Engels) was written in a creative burst in Brussels for a German emigré society, the Communist League. After taking part in the failed revolutions of 1848, Marx fled to London, where he and his family lived in poverty alleviated only by Engels’ financial help. For some years, Marx was a London correspondent for a New York newspaper. He spent most of his time, however, researching in the British Museum to document his theories of class struggle and the “internal contradictions” undermining capitalism. His works include: The Poverty of Philosophy, The Eighteenth Brumaire of Louis Bonaparte, The German Ideology, and A Contribution to the Critique of Political Economy.

Friedrich Engels (1820-1895) was born in Germany, the son of a textile manufacturer. After his military training in Berlin he became an agent of his father’s business in Manchester and immersed himself in Chartism and the problems of the new urban proletariat created by the industrial revolution. In 1844, the year he met Karl Marx, he wrote The Condition of the Working Class in England. The pair’s ideas were incorporated into The Communist Manifesto, although the actual writing was done by Marx. Not only did Engels provide Marx with money, but after 1870 spent much time assisting him in his research. After Marx’s death Engels continued his work on Das Kapital, and completed it in 1894, a year before his own death. He also wrote The Peasant War in Germany, The Origin of the Family, and Socialism, Utopian and Scientific.

Martin Malia did his undergraduate work at Yale and earned his Ph.D. at Harvard. He has spent most of his teaching career at the University of California at Berkeley. His principal works include Alexander Herzen and the Birth of Russian Socialism, 1812-1855, The Soviet Tragedy: A History of Socialism in Russia, 1917-1991, and Russia under Western Eyes: From the Bronze Horseman to the Lenin Mausoleum.

Stephen Kotkin teaches history and international affairs at Princeton. His books include Armageddon Averted: The Soviet Collapse 1970-2000 and Uncivil Society: 1989 and the Implosion of the Communist Establishment. He formerly directed Princeton's Russian and Eurasian studies program (1996-2009) and served as the regular business book reviewer for the New York Times Sunday Business section (2006-2008). He founded and runs Princeton's Global History initiative.