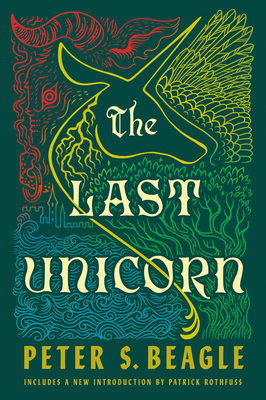 Experience one of the most enduring classics of the twentieth century and the book that The Atlantic has called “one of the best fantasy novels ever.”

The unicorn lived in a lilac wood, and she lived all alone...

...so she ventured out from the safety of the enchanted forest on a quest for others of her kind. Joined along the way by the bumbling magician Schmendrick and the indomitable Molly Grue, the unicorn learns all about the joys and sorrows of life and love before meeting her destiny in the castle of a despondent monarch—and confronting the creature that would drive her kind to extinction....

In The Last Unicorn, renowned and beloved novelist Peter S. Beagle spins a poignant tale of love, loss, and wonder that has resonated with millions of readers around the world.

Peter S. Beagle was born in 1939 and raised in the Bronx, just a few blocks from Woodlawn Cemetery, the inspiration for his first novel, A Fine and Private Place. Today, thanks to classic works such as The Last Unicorn, Tamsin, and The Innkeeper’s Song, he is acknowledged as America’s greatest living fantasy author; and his dazzling abilities with language, characters, and magical storytelling have earned him many millions of fans around the world.

In addition to stories and novels Beagle has written numerous teleplays and screenplays, including the animated versions of The Lord of the Rings and The Last Unicorn, plus the fan-favorite “Sarek” episode of Star Trek: The Next Generation. His nonfiction book I See By My Outfit, which recounts a 1963 journey across America on motor scooter, is considered a classic of American travel writing; and he is also a gifted poet, lyricist, and singer/songwriter.
Praise for Peter S. Beagle and The Last Unicorn

“Written in lyrical prose and rife with both whimsical humor and philosophical ruminations on what it means to be human, Beagle spins a quasi-medieval fairy tale that remains timeless.”—Time

“Peter S. Beagle is (in no particular order) a wonderful writer, a fine human being, and a bandit prince out to steal readers’ hearts.”—Tad Williams

“Almost as if it were the last fairy tale, come out of lonely hiding in the forests of childhood, The Last Unicorn is as full of enchantment as any of the favorite tales readers may choose to recall...A delicate, sensitive, yet powerful rendering of all the intangibles that make a fairy tale unforgettable.”—St. Louis Post-Dispatch

“Beagle...has been compared, not unreasonably, with Lewis Carroll and J.R.R. Tolkien, but he stands squarely and triumphantly on his own feet...The book is rich, not only in comic bits but also in passages of uncommon beauty. Beagle is a true magician with words, a master of prose and a deft practitioner in verse.”—The Saturday Review