A Case of Need: A Suspense Thriller (Mass Market) 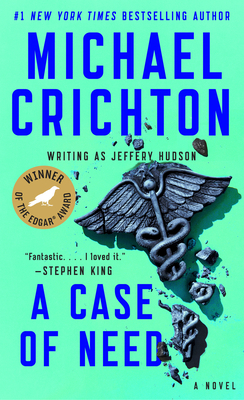 A Case of Need: A Suspense Thriller (Mass Market)

The author of cutting-edge bestsellers like Jurassic Park and The Andromeda Strain, Michael Crichton captivated millions of fans by skillfully blending medical and scientific fact with pulse-pounding fiction.

Written shortly after Crichton completed his medical internship, A Case of Need depicts the ever-building pressure and pace of a large Boston medical center. Tensions flare—and explode—when a surgical operation tragically ends in death, raising countless questions. Was it accidental malpractice? A violation of the Hippocratic oath? Or cold-blooded murder?

Supplemented with the author’s fascinating appendices on the ethics of modern medicine, A Case of Need is powerful, compelling, informative, and suspenseful—classic Crichton at his best.
Michael Crichton was the #1 New York Times bestselling author of the groundbreaking novels The Andromeda Strain, The Great Train Robbery, Jurassic Park, Disclosure, Prey, State of Fear, Timeline, Sphere, and Congo, among many others. His books have sold more than 200 million copies worldwide, have been translated into thirty-eight languages, and have provided the basis for fifteen feature films. He was the director of the films Westworld, Coma, The Great Train Robbery, and Looker, as well as the creator of the television series ER. Crichton remains the only writer to have a number one book, movie, and TV show in the same year. He died in 2008.
Praise for Michael Crichton and A Case of Need

“The story is dramatic, plausible, well-written and not only medically accurate but medically fascinating.”—The Minneapolis Tribune

“I love anything Michael Crichton writes, but his early medical thrillers have been favorites of mine.”—Stephen King

“Crichton’s writing is cinematic, with powerful visual images and nonstop action. [His books] should come with hot buttered popcorn.”—Newsweek