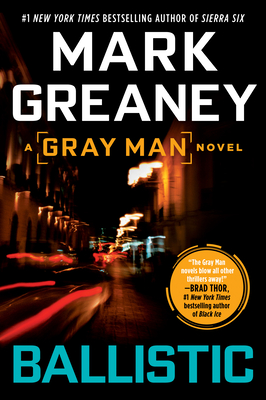 This is book number 3 in the Gray Man series.

After Court Gentry was betrayed by his compatriots and forced to take on a near-suicidal covert mission by the CIA, he thought he could find refuge living in the Amazon rain forest. But his bloody past finds him when a vengeful Russian crime lord forces him to go on the run once again. Court makes his way to one of the only men in the world he can trust—and arrives too late. His friend is dead and buried.

Years before, Eddie Gamboa had saved Court's life. Now, Eddie has been murdered by the notorious Mexican drug cartel he fought to take down. And Court soon finds himself drawn into a war he never wanted. But in this war, there are no sides—only survivors...
Mark Greaney has a degree in international relations and political science. In his research for the Gray Man novels, including Agent in Place, Gunmetal Gray, Back Blast, Dead Eye, Ballistic, On Target, and The Gray Man, he traveled to more than fifteen countries and trained alongside military and law enforcement in the use of firearms, battlefield medicine, and close-range combative tactics. He is also the author of the New York Times bestsellers Tom Clancy Support and Defend, Tom Clancy Full Force and Effect, Tom Clancy Commander in Chief, and Tom Clancy True Faith and Allegiance. With Tom Clancy, he coauthored Locked On, Threat Vector, and Command Authority.

“Greaney once again pumps new life into familiar thriller conventions...An extremely capable warrior with multiple tricks and tradecraft, Courtland has a complicated past and a long list of mortal enemies, so readers can look forward to plenty of dangerous adventures.”—Publishers Weekly

“Writing as smooth as stainless steel and a hero as mean as razor wire.”—New York Times bestselling author David Stone

“A high-octane thriller that doesn’t pause for more than a second for all of its 464 pages.”—Chicago Sun-Times