A Practical Handbook for the Actor (Paperback) 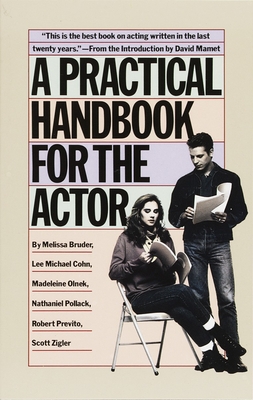 A Practical Handbook for the Actor (Paperback)


Backordered
For anyone who has ever wanted to take an acting class, "this is the best book on acting written in the last twenty years" (David Mamet, from the Introduction).

This book describes a technique developed and refined by the authors, all of them young actors, in their work with Pulitzer Prize-winning playwright David Mamet, actor W. H. Macy, and director Gregory Mosher. A Practical Handbook for the Actor is written for any actor who has ever experienced the frustrations of acting classes that lacked clarity and objectivity, and that failed to provide a dependable set of tools. An actor's job, the authors state, is to "find a way to live truthfully under the imaginary circumstances of the play." The ways in which an actor can attain that truth form the substance of this eloquent book.
Melissa Bruder, Lee Michael Cohn, Madeleine Olnek, Nathaniel Pollack, Robert Previto, and Scott Zigler are actors who worked with David Mamet and W. H. Macy at New York University and at the Goodman Theatre in Chicago. Members of the Practical Aesthetics Workshop, they helped found the Atlantic Theatre Company with Mamet and Macy in 1985.

"This is the best book on acting written in the last twenty years." —from the introduction by David Mamet

"Simple, clear and consise—just what was needed. A deeply interesting and valuable piece of work." —Sidney Lumet

"This terse and lucid handbook might well be for the actor what Strunk and White's The Elements of Style is for the writer." —John Guare

"This book is wonderful. It is clear, direct, and to the point, with none of the hokum that accompanies most books on the theatre, especially about acting. I learned an enormous amount." —Robert Benton

"This beautifully written book offers a clear guide to the most profound acting technique I  know. Every young actor should read it, re-read it, and then keep it under his pillow." —Lindsay Crouse