Fencing with the King: A Novel (Hardcover) 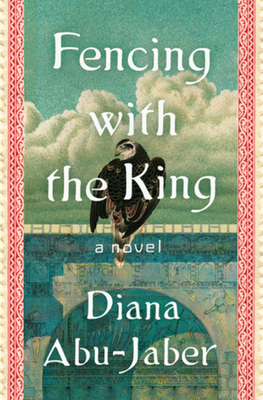 Fencing with the King: A Novel (Hardcover)

One of The Millions' Most Anticipated Books of the Month

A mesmerizing breakthrough novel of family myths and inheritances by the award-winning author of Crescent.

The King of Jordan is turning 60! How better to celebrate the occasion than with his favorite pastime—fencing—and with his favorite sparring partner, Gabriel Hamdan, who must be enticed back from America, where he lives with his wife and his daughter, Amani.

Amani, a divorced poet, jumps at the chance to accompany her father to his homeland for the King’s birthday. Her father’s past is a mystery to her—even more so since she found a poem on blue airmail paper slipped into one of his old Arabic books, written by his mother, a Palestinian refugee who arrived in Jordan during World War I. Her words hint at a long-kept family secret, carefully guarded by Uncle Hafez, an advisor to the King, who has quite personal reasons for inviting his brother to the birthday party. In a sibling rivalry that carries ancient echoes, the Hamdan brothers must face a reckoning, with themselves and with each other—one that almost costs Amani her life.

With sharp insight into modern politics and family dynamics, taboos around mental illness, and our inescapable relationship to the past, Fencing with the King asks how we contend with inheritance: familial and cultural, hidden and openly contested. Shot through with warmth and vitality, intelligence and spirit, it is absorbing and satisfying on every level, a wise and rare literary treat.

Diana Abu-Jaber is the award-winning author of seven books of fiction and nonfiction, including Crescent and The Language of Baklava. She lives in Fort Lauderdale, Florida.
Diana Abu-Jaber outdoes herself with this brilliantly paced and utterly absorbing novel. From start to finish, her dynamic prose and seemingly effortless storytelling create an original narrative of love, intrigue, and family/global dynamics. Fencing with the King is a flavorful page-turner that will both nourish and satiate. You are in for a treat.

— Laila Halaby, author of Once in a Promised Land

A rare pleasure. Abu-Jaber’s rich characters live and breathe around you, and her nuance and wit bring the largest themes to irresistible, present life.
— Claire Messud, author of The Burning Girl

I read Diana Abu-Jaber’s Fencing with the King in one sitting— I couldn’t stop. Ambitious, vivid, compelling, and full of life, this rich family story tells so many truths and uses family myths and fables to explore complex history, intergenerational trauma, and the wounds of exile and displacement. An absolute must read.

— Etaf Rum, author of A Woman is No Man

A delicate arabesque of intertwining family relationships, Fencing with the King probes the cost of exile and voluntary expatriation, asking: When is inheritance a blessing, and when is it merely a burden?

The best novel I’ve read all year: shimmering prose, compelling emotion, and utterly impossible to put down. Rarely has the terroir of ancestry been so masterfully evoked. Abu-Jaber’s best yet.
— Nicole Mones, author of The Last Chinese Chef

Abu-Jaber spins a mesmerizing tale of displacement...this is a haunting look at the pull the past exerts on us.
— Poornima Apte - Booklist

Abu-Jaber ably captures the tenuous role of Jordan in the mid-1990s Middle East peace process while unearthing a family’s buried secrets. It adds up to an engrossing family drama.
— Publishers Weekly

Abu-Jaber beautifully captures the essence of Jordan, poised as it is between modernity and ancient ways...[Fencing With the King] builds to an unforgettable denouement that juxtaposes the tragedies of inheritance and displacement.