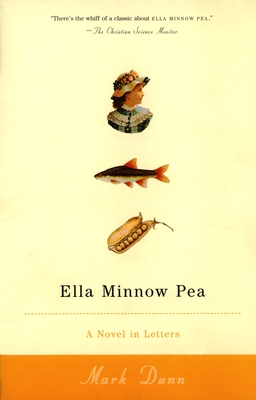 
Usually Ships in 1-5 Days
A hilarious and moving story of one girl’s fight for freedom of expression, as well as a linguistic tour de force sure to delight word lovers everywhere

Ella Minnow Pea is a girl living happily on the fictional island of Nollop off the coast of South Carolina. Nollop was named after Nevin Nollop, author of the immortal phrase containing all the letters of the alphabet, “The quick brown fox jumps over the lazy dog.”

Now Ella finds herself acting to save her friends, family, and fellow citizens from the encroaching totalitarianism of the island’s Council, which has banned the use of certain letters of the alphabet as they fall from a memorial statue of Nevin Nollop. As the letters progressively drop from the statue they also disappear from the novel. The result is "a love letter to alphabetarians and logomaniacs everywhere" (Myla Goldberg, bestselling author of Bee Season).
Mark Dunn is the author of seven novels and more than thirty full-length plays. Belles and Five Tellers Dancing in the Rain have together received over 150 productions throughout the world, and Dunn has been the recipient of several national playwriting awards. Currently the playwright-in-residence with the New Jersey Repertory Company and the Community Theatre League in Williamsport, PA, he lives in Santa Fe, NM.

“There’s the whiff of a classic about Ella Minnow Pea.” —The Christian Science Monitor

“A love letter to alphabetarians and logomaniacs everywhere.” —Myla Goldberg

“A curiously compelling . . . satire of human foibles, and a light-stepping commentary on censorship and totalitarianism.” —The Philadelphia Inquirer