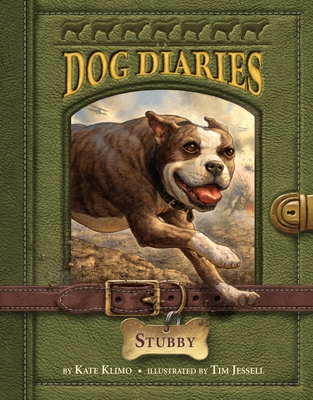 This is book number 7 in the Dog Diaries series.

A scrappy stray becomes one of the greatest dogs in military history!

Stubby the war dog narrates the story of his life--from his days as a stray to his time on the battlefields of France! Adopted by Private John Robert Conroy in 1917 when the dog wandered into training camp, Stubby soon became the mascot for the 26th Yankee division--even learning how to salute! When the men were shipped out for France, Conroy smuggled Stubby on-board . . . and the rest is the kind of incredible true story that dog-crazy middle graders sit up and beg for! By the end of the war, Stubby had served in 17 battles, been injured by mustard gass and grenade; found and captured a German spy; shaken hands with Woodrow Willson; and become the first dog given rank in the United States Armed Forces!
KATE KLIMO is the author of many books for young readers, including The Dragon Keepers and all the books in the Dog Dairies series. She lives in New Paltz with her husband and two horses, Harry and Fancy. Over the years, she has served as companion to eight dogs: Pal, Beauregard, Fred, Kelly, Bear, Rascal, Dobey, and George W. Currently, she is searching for a furever friend who gets along well with horses. To learn more about her and her work, visit www.kateklimoauthor.com.

TIM JESSELL is an award-winning illustrator whose work has appeared in numerous children's books. He is the illustrator of all the books in the Dog Diaries series. Check out his work at timjessell.com.