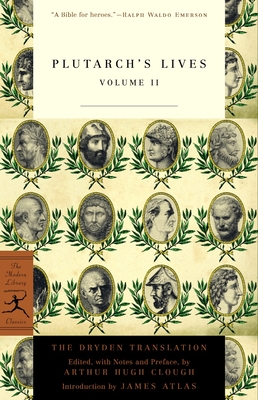 By Plutarch, Arthur Hugh Clough (Editor), James Atlas (Introduction by), John Dryden (Translated by)
List Price: $18.00
Our Price: $16.20
(Save: $1.80 10%)
Usually Ships in 1-5 Days
Plutarch's Lives, written at the beginning of the second century A.D., is a brilliant social history of the ancient world by one of the greatest biographers and moralists of all time. In what is by far his most famous and influential work, Plutarch reveals the character and personality of his subjects and how they led ultimately to tragedy or victory. Richly anecdotal and full of detail, Volume I contains profiles and comparisons of Romulus and Theseus, Numa and Lycurgus, Fabius and Pericles, and many more powerful figures of ancient Greece and Rome.

The present translation, originally published in 1683 in conjunction with a life of Plutarch by John Dryden, was revised in 1864 by the poet and scholar Arthur Hugh Clough, whose notes and preface are also included in this edition.
James Atlas is the author of Bellow: A Biography and is the general editor of the Penguin Lives series. He lives in New York City.

"A Bible for heroes."