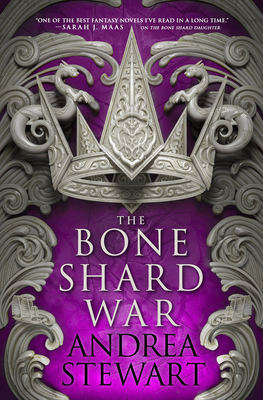 This is book number 3 in the The Drowning Empire series.

From the author of The Bone Shard Daughter comes the final book in the Drowning Empire series, as the fate of Lin Sukai—and her family’s dynasty—lay in her hands in this action-packed, magic-laced epic fantasy.

Lin Sukai has won her first victory as Emperor, but the future of the Phoenix Empire hangs in the balance – and Lin is dangerously short of allies.

As her own governors plot treason, the Shardless Few renew hostilities. Worse still, Lin discovers her old nemesis Nisong has joined forces with the rogue Alanga, Ragan. Both seek her death.

Yet hopes lies in history. Legend tells of seven mythic swords, forged in centuries past. If Lin can find them before her enemies, she may yet be able to turn the tide.

If she fails, the Sukai dynasty – and the entire empire – will fall.
Andrea Stewart is the daughter of immigrants, and was raised in a number of places across the United States. Her parents always emphasized science and education, so she spent her childhood immersed in Star Trek and odd-smelling library books.
When her (admittedly ambitious) dreams of becoming a dragon slayer didn't pan out, she instead turned to writing books. She now lives in sunny California, and in addition to writing, can be found herding cats, looking at birds, and falling down research rabbit holes.
"The Bone Shard Daughter is one of the best fantasy novels I've read in a long time. With stunningly intricate world-building that leaps off the page and characters who are so vibrant that you wish they were real, it grabs you by the heart and the throat from the first pages and doesn't let go until long after it's over. This book is truly special."—New York Times bestselling author Sarah J. Maas on The Bone Shard Daughter

"A fascinating world with characters who have deep foundations, and who will quickly capture readers' hearts ... Stewart's debut is sharp and compelling. It will hook readers in and make them fiercely anticipate the rest of the series."—Booklist on The Bone Shard Daughter

"There's a bold, ambitious imagination at work here - and this is a world you'll want to linger in."—M. R. Carey, author of The Girl with All the Gifts, on The Bone Shard Daughter

"The twisting turns of political negotiations, the desperation of each character to do what’s right, and the carefully written world building come together to power this compelling and suspenseful fantasy.... Stewart’s elegant planning and unspooling revelations will keep readers hooked from the first page, and fans will be impatient for the next and final volume in the trilogy." —Booklist on The Bone Shard Emperor