Mr. Revere and I: Being an Account of certain Episodes in the Career of Paul Revere,Esq. as Revealed by his Horse (Paperback) 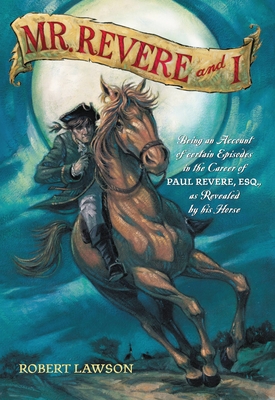 Mr. Revere and I: Being an Account of certain Episodes in the Career of Paul Revere,Esq. as Revealed by his Horse (Paperback)

By Robert Lawson
List Price: $7.99
Our Price: $7.19
(Save: $0.80 10%)
Usually Ships in 1-5 Days
Paul Revere didn't make his famous midnight ride alone. Meet a patriot unlike any other: Scheherazade, the mare who doesn't mind mentioning she was once the fastest and most admired horse in the King's army. But on arrival in America, "Sherry" is quickly let down by her British rider and recruited by Sam Adams to join the Sons of Liberty. Before long, she finds herself teamed with Raul Revere to play a key-if unnoticed-role in the American Revolution. Full of wit and wisdom, this beloved classic presents an unforgettable view to the birth of a nation-straight from the horse's mouth!

Explore this historical time period even further in this new edition of award-winning author Robert Lawson's classic tale, with additional bonus material, including a map of Paul Revere's ride!
Robert Lawson (1892-1957) is one of the greatest names in children's literature. He is the author and illustrator of such classics as Ben and Me, Mr. Revere and I, Mr. Popper's Penguins, and I Discover Columbus. His last completed work was The Big Wheel.