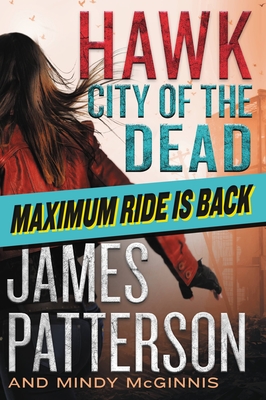 This is book number 2 in the Maximum Ride: Hawk series.

Hawk, the daughter of Maximum Ride, teams with her mother up to help save their beloved but dangerous city in this action-packed thriller.

For Hawk, being a hero weighs heavily on her wings.

In the City of the Dead, life happens in the shadows. That's why a war is brewing against an enemy no one can see.

Hawk and Maximum Ride never back down from a conflict, or from each other, and they argue more than they agree.

But as the dead begin to outnumber the living, a mother's experience and a daughter's instinct can make for one powerful arsenal.
James Patterson is the world's bestselling author. The creator of Maximum Ride and Crazy House, he has donated more than one million books to students and soldiers, as well as millions of dollars to independent bookstores and school libraries. He lives in Florida with his family.

Mindy McGinnis is an Edgar Award-winning novelist who writes across multiple genres, including post-apocalyptic, historical, thriller, contemporary, mystery, and fantasy.

"Expect Patterson's return to the Maximum Ride universe to soar to even greater heights than before." --- Booklist