One Day I Shall Astonish the World (Hardcover) 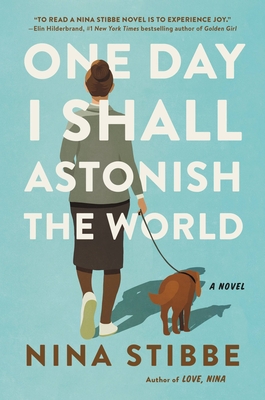 One Day I Shall Astonish the World (Hardcover)

Susan and Norma have been best friends for years, at first thrust together by force of circumstance (a job at The Pin Cushion, a haberdashery shop in 1990s Leicestershire) and then by force of character (neither being particularly inclined to make friends with anyone else). But now, thirty years later, faced with a husband seeking immortality and Norma out of reach on a wave of professional glory, Susan begins to wonder whether she has made the right choices about life, love, work, and, most importantly, friendship.

Nina Stibbe's new novel is the story of the wonderful and sometimes surprising path of friendship: from its conspiratorial beginnings, along its irritating wrong turns, to its final gratifying destination.

Nina Stibbe is the author of two works of nonfiction, Love, Nina and An Almost Perfect Christmas, and three previous novels, Man at the Helm, ParadiseLodge, and Reasons to Be Cheerful, which won both the Bollinger Everyman Wodehouse

Prize for Comic Fiction and the Comedy Women in Print Prize. Love, Nina was adapted by Nick Hornby into a BBC TV series. Stibbe lives in Cornwall.

"As a comic novelist, Stibbe is so truly incomparable, I can only describe this perfect novel as Stibbe meets Stibbe, with a touch of Stibbe. (And if you love Nina Stibbe…you’ll love this.) For as long as I could make it last, the world just felt a bit nicer. A true gift of a novel, I utterly adored it."—MEG MASON, author of Sorrow and Bliss

“A master wielder of dry British humor, Stibbe (Love, Nina) here chronicles 30 years in the lives of frenemies Susan and Norma – a tangle of sweetness, snubs and secrets from their university days to middle age. There’s an LOL moment on almost every page, which makes the pandemic ending astonishingly moving.”—PEOPLE MAGAZINE

“In this tender and comical novel, a middle-aged woman navigates the changes in her life as her husband begins seeking immortality and her lifelong best friend is propelled to professional glory.”
—NEW YORK TIMES

“Nina Stibbe is the hero of finding your voice…She puts words together with an immaculate ear for the absurd, mixing satire and bathos, juxtaposing quirkily unlike objects and sentiments in sentences so funny you howl with laughter. But underneath is a sharp-eyed, non-judgmental message about tolerating other people – people very different from yourself…her new novel is Elena Ferrante re-scripted as English comedy…wayward, wildly original and beautifully noticing.”—THE TELEGRAPH

“Nina Stibbe is one of our most beloved comic writers:One Day I Shall Astonish The World... about the lifelong friendship between two women, will cement that reputation further.”—DAILY MAIL

“Funny, charming, odd-in-the-best-way and gorgeously uplifting! A delight from start to finish.”—MARIAN KEYES

“Stibbe is one of the great comic writers of our time.”—IRISH TIMES

More Praise for Nina Stibbe:
"To read a Nina Stibbe novel is to experience joy."—Elin Hilderbrand, bestselling author of 28 SUMMERS

“Another wonderful, funny slice of fiction from the author of best-seller, Love Nina. Her latest novel explores a decades-long friendship between two women and what happens when your paths diverge.”—Good Housekeeping

"With her singular voice and deep roots in the English psyche, Stibbe has carved out a niche for oddball female narrators set against quirky provincial settings...Stibbe’s new novel, with its long time span and variable, sometimes chilly relationships, offers a cooler vision than some of her earlier works, but the trademark tone, humor, nostalgic detail, and skewed perspective remain as reliably diverting as ever."—Kirkus Reviews

"Stibbe turns out more perfect, sharp, unique sentences than anyone else in the game."—Caitlin Moran

For beautifully funny and well-observed comic writing, Nina Stibbe is your go-to author. In her latest release, a tale of lifelong friendship between Susan and Norma, she explores the mistakes, rivalries and love we all experience in life—Stylist

"So dense with amusing detail that I thought about holding the book upside down to see if any extra funny bits might spill from the creases between the page."—New York Times Book Review

“We simply like being in Ms. Stibbe's company."—Dwight Garner, The New York Times

“An anything-but-average tale of a thrillingly ordinary friendship, which is to say one that's strengthening, humiliating, confounding, and cheering, depending on the day.”—Booklist, Starred Review