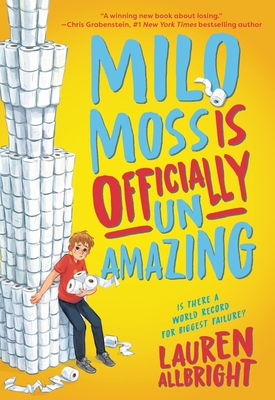 By Lauren Allbright
List Price: $16.99
Our Price: $13.59
(Save: $3.40 20%)
"A winning new book about losing." --Chris Grabenstein, #1 New York Times bestselling author
Modern Family meets The Miscalculations of Lightning Girl in this humorous and heartfelt story about a boy desperately trying to break a world record and ultimately discovering what winning really means along the way.
Twelve-year-old Milo Moss has been on a mission to achieve his family's lifelong goal: breaking a world record. It's why he and his parents, along with thousands of others, are standing in the middle of a football stadium dressed as human-sized cockroaches.

But when the record attempt doesn't exactly go as planned, Milo and his family are failures once again. Now more than ever, Milo needs support from his best friend, Jesse (who also happens to be his nephew -- don't ask, it's complicated). But when Jesse discovers the truth about Milo's record attempt, he pressures him to come clean to the whole school.

Desperate to avoid public humiliation, Milo must team up with an unlikely ally to stop the record madness once and for all. Will Milo be able to leave behind his dream of breaking a record? Or will he learn that sometimes there's more to life than winning?
"Hilarious and bursting with hijinks from beginning to end." --Stacy McAnulty, author of The Miscalculations of Lightning Girl

Lauren Allbright is the author of the middle-grade novel, Exit Strategy. When she is not writing (or failing in her attempts at Mom of the Year), she teaches seventh graders who might earn a record for some of the World's Coolest Kids Ever. She lives in Dallas with her awesome husband and her three epic children.

"From Milo's adorably quirky parents to his family's outrageous attempts to break a Guinness world record, I couldn't stop smiling from the first page until the last."—Dusti Bowling, author of Insignificant Events in the Life of a Cactus

"A funny, heartwarming tale about family, friendship and finding your significance. I found Milo Moss to be officially amazing!"—Melissa Savage, author of Lemons

"A fun outing with a somewhat ordinary character who may resemble not just people we know, but ourselves -- if we're honest."—School Library Journal

"A climax that is 'officially amazing.'"—Booklist