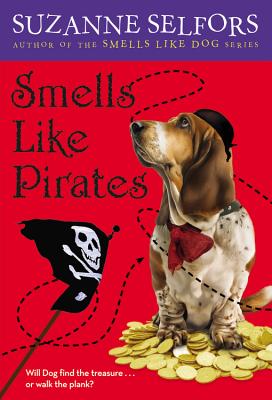 This is book number 3 in the Smells Like Dog series.

Homer thought that being inducted as a member of the treasure hunting society L.O.S.T. would be the key to finding pirate Rumpold Smeller's missing fortune. But when Homer's sworn enemy, Lorelei, forms an evil organization called FOUND, Homer and Dog face an impossible decision: Work with Lorelei to find the prize once and for all, or abandon their lifelong quest to locate the treasure.
In the end, there can be only one owner of the coveted pirate booty. Who will reach it first? And who will be forced to walk the plank? What does FOUND mean for the future of L.O.S.T.? And just what is this famous treasure, anyway? Adventure abounds in this fun-filled, seaworthy tale of friendship, mystery, and one very special four-legged friend.
Suzanne Selfors is a national best selling author of the Ever After High School Stories series, the Imaginary Veterinary series, the Smells Like Dog series, and many other books. She's earned five Junior Library Guild Awards and a WA State Book Award. She's been a Kid's Indie Pick, a Scholastic Book Fair bestseller, and been included in Bank Street's 100th Edition of Best Children's Books, Smithsonian Magazine's Notable Children's Books, and Amazon's Best Children's Books.

She lives on an island in the Pacific Northwest where rain falls like music and horses are beloved.
Praise for the Smells Like Dog series:* "Selfors offers up an adventure tale that features a humorous, high-stakes mystery and a lovable hero....Peppered with funny dialogue, this joyous romp is a page-turning adventure that will appeal to enthusiastic and reluctant readers alike."—Kirkus Reviews, starred review

* "A funny, suspenseful adventure that stretches the borders of readers' imaginations. A heartwarming and quirky cast of characters adds to the fun...Homer and Dog are a strange, silly, and lovable duo."—School Library Journal, starred review

"A fantastic tale in every good sense of the word....Homer W. Pudding: my kind of hero."—Rebecca Stead, author of Newbery Medal winner When You Reach Me