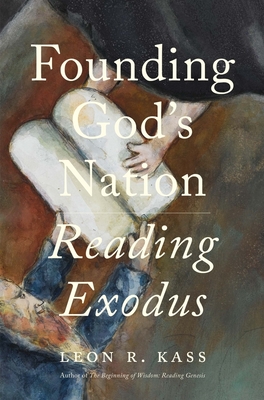 
Backordered
A chapter-by-chapter explanation of the Book of Exodus, revealing its wisdom about nation building and people formation

In this long-awaited follow-up to his 2003 book on Genesis, humanist scholar Leon Kass explores how Exodus raises and then answers the central political questions of what defines a nation and how a nation should govern itself. Considered by some the most important book in the Hebrew Bible, Exodus tells the story of the Jewish people from their enslavement in Egypt, through their liberation under Moses’s leadership, to the covenantal founding at Sinai and the building of the Tabernacle. In Kass’s analysis, these events began the slow process of learning how to stop thinking like slaves and become an independent people. The Israelites ultimately founded their nation on three elements: a shared narrative that instills empathy for the poor and the suffering, the uplifting rule of a moral law, and devotion to a higher common purpose. These elements, Kass argues, remain the essential principles for any freedom-loving nation today.
Leon R. Kass is the Addie Clark Harding Professor Emeritus in the Committee on Social Thought and the College at the University of Chicago and Dean of the Faculty at Shalem College in Jerusalem. His books include The Beginning of Wisdom: Reading Genesis.

“Accessible . . . General readers interested in the Hebrew Bible will get much from Kass’s trenchant work.”—Publishers Weekly

"Using the techniques of close reading and ‘living with the text’ that have made him such a revered teacher, Kass has come to understand Exodus as more than a narrative of national formation."—Matthew Continetti, Washington Free Beacon

“Despite its many confusions, our era has somehow contrived to produce the ideal teacher in Leon Kass . . . Out of [an] open-minded reading of Exodus, a familiar story takes on fresh meaning: Now, through Kass’s commentary, Exodus offers us a profound reflection on what it means to be a true people, not merely an aggregate of individuals or a network of families.”—George Weigel, First Things

"Leon Kass invites believer and unbeliever alike to read the book of Exodus alongside him . . . [His] remarkable commentary provides insights on every page, from which to learn and with which to wrestle."—James R. Rogers, Law & Liberty

"Leon Kass’ brilliant new book provides an opportunity for professors of political philosophy to add the book of Exodus to the canon of works that they assign to their students. . . . At last, someone has done for Exodus what so many political philosophers have done for Plato’s Republic, Aristotle’s Politics, and a host of secular works."—, Christians in Political Science

"Exodus wants not merely to be heard but to be heeded—understood in soul-forming ways. Kass responds to this imperative with a keen sense of the spiritual and political drama of Exodus. He registers in warm, clear prose the rich resonances and emotional and intellectual tones of the book’s essential events and themes."—Jacob Howland, Jewish Review of Books

“Kass’s book asks important questions of the text, and offers sensible and sometimes innovative answers. If the book is translated into Hebrew, it will live forever as a commentary on the text alongside other philosophic commentaries. . . . Everyone who aims to think about the text will do well to consult Kass.”—Michael S. Kochin, Claremont Review of Books

“By reading the Bible as a significant political teaching, Kass illuminates a critical yet neglected … dimension of the account and begins making the case for its compelling wisdom.”—Steven H. Frankel, Interpretation

“This is an extraordinary book.”—L. J. Greenspoon, Choice

“A wondrous achievement of humanistic scholarship at its very best, making Exodus’s ancient words live again as a source of political wisdom and spiritual inspiration for our time.”—Rabbi Lord Jonathan Sacks

"What Leon Kass describes as living with the book over two decades enabled him to glean from it insights into the deepest existential questions, what Kass himself calls 'longings of the soul.' His greatest achievement is to give readers a glimpse of these insights and suggest to us the possibility—and profound value—of exploring them ourselves."— Robert P. George, McCormick Professor of Jurisprudence, Princeton University

"Leon Kass maps the Book of Exodus with unmatched intelligence. We have known the book through the interpretations of generations of sages, but here he reads it as though for the first time to see the Jewish nation emerging from slavery and taking its civilizing shape. This is the most exciting book I’ve read in years"—Ruth Wisse, professor emerita of Yiddish Literature, Harvard University

"Building on his earlier insightful study of the family in Genesis, Leon Kass turns to the formation of the Israelite nation in Exodus, with an openness to discovery sparked by perceptive observations and guided by fundamental questions."—Ronna Burger, Catherine & Henry J. Gaisman Professor of Philosophy, Tulane University

“To be guided through Exodus by Leon Kass is to discover in those familiar stories a font of political wisdom and a provocation to reflection on the meaning of human flourishing.”—Mary Ann Glendon, author of A World Made New: Eleanor Roosevelt and the Universal Declaration of Human Rights