The Tainos: Rise and Decline of the People Who Greeted Columbus (Paperback) 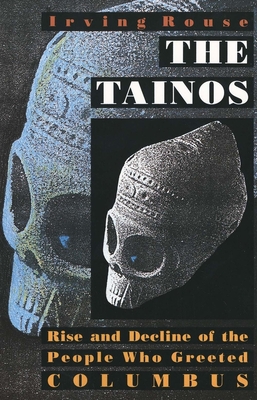 The Tainos: Rise and Decline of the People Who Greeted Columbus (Paperback)

By Irving Rouse
List Price: $25.00
Our Price: $22.50
(Save: $2.50 10%)
Usually Ships in 1-5 Days
From a noted archeologist/anthropologist, the story of the Tainos—the first people Columbus encountered when he arrived in the Americas—from their earliest days to their rapid decline after European contact
"A model of clarity and lightly worn erudition, and it contains the best and most straightforward description of the four Columbus voyages and their implications for the Amerindians I have seen."—Kenneth Maxwell, New York Times Book Review
Drawing on archeological and ethno-historical evidence, Irving Rouse sketches a picture of the Tainos as they existed during the time of Columbus, contrasting their customs with those of their neighbors. He then moves backward in time to the ancestors of the Tainos—two successive groups who settled the West Indies and who are known to archeologists as the Saladoid peoples and the Ostionoid peoples. By reconstructing the development of these groups and studying their interaction with other groups during the centuries before Columbus, Rouse shows precisely who the Tainos were. He vividly recounts Columbus's four voyages, the events of the European contact, and the early Spanish views of the Tainos, particularly their art and religion. The narration shows that the Tainos did not long survive the advent of Columbus. Weakened by forced labor, malnutrition, and diseases introduced by the foreigners, and dispersed by migration and intermarriage, they ceased to exist as a separate population group.

As Rouse discusses the Tainos' contributions to the Spaniards—from Indian corn, tobacco, and rubber balls to art, artifacts, and new words—we realize that their effect on Western civilization, brief through their contact, was an important and lasting one.
Irving Rouse is Charles J. MacCurdy Professor Emeritus of Anthropology at Yale University and Curator Emeritus of Anthropology at the Peabody Museum of Natural History, Yale University.

"A model of clarity and lightly worn erudition, and it contains the best and most straightforward description of the four Columbus voyages and their implications for the Amerindians I have seen. . . . Columbus had found large, permanent villages of Tainos Indians in Hispaniola and Puerto Rico, each governed by a chief or cacique, and each containing an average of two thousand people. Rouse vividly describes their everyday life."—Kenneth Maxwell, New York Times Book Review

"[A] masterpiece of the cultural/historical approach . . . informative and accessible . . . Highly recommended for a general audience and anyone interested in the [Columbus] quincentenary."—William S. Dancey, Library Journal

"A highly readable work. . . . This timely book is probably the best account ever of the Taino Indians."—Francis Poole, Magill Book Reviews

"[An] excellent study, illustrated with many fine maps, charts, line drawings. . . . [For] all levels of readers."—Choice

"The best and most complete book on the Tainos by a scholar who has studied their culture all over the Greater Antilles for half a century."—Ricardo E. Alegría

"We are fortunate indeed to have at last the authoritative and up-to-date account of the Taino Indians from the acknowledged dean of Taino scholars. And just in time so that we may remember them too during this Quincentennial year."—Kirkpatrick Sale

"In view of the quincentenary of the voyages of Columbus this is a timely book. It is also a significant one, for it is the first major revision of Caribbean archaeology in English since 1935. No other American archaeologist is better suited to write such an encompassing volume."—David R. Watters