Astroquizzical: Solving the Cosmic Puzzles of Our Planets, Stars, and Galaxies: The Illustrated Edition (Hardcover) 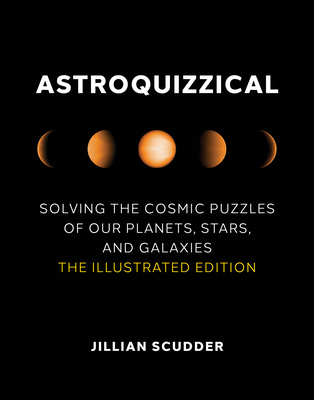 Astroquizzical: Solving the Cosmic Puzzles of Our Planets, Stars, and Galaxies: The Illustrated Edition (Hardcover)

By Jillian Scudder
List Price: $29.95
Our Price: $26.96
(Save: $3.00 10%)
Usually Ships in 1-5 Days
Exploring the family tree of the cosmos, from humans on Earth to stars and galaxies to the first atoms of the Big Bang; with striking color illustrations.

Looking up at the night sky, we see not only stars twinkling in their constellations and planets caught mid-orbit but our cosmic family tree. We are here on Earth because billions of years ago the Big Bang created the atoms that, over unimaginable periods of time, formed the stars and galaxies. Generations of stars that burned, exploded, or collided long before our planet was formed created the carbon of our bodies and the iron in our blood. In Astroquizzical, astrophysicist Jillian Scudder takes readers on a curiosity-driven journey through outer space, traveling back in time from Earth to the stars and galaxies to the cosmic explosions of the Big Bang.

Scudder proceeds—astroquizzically—question by question, answering and explaining such queries as “What color is the universe?,” “Do all planets spin the same way?,” and “How many galaxies are there?” Along the way, she proposes a series of thought experiments, including “What would happen if we split the sun in half?” and “What happens to time dilation at the speed of light?” She covers meteors, the aurora, and the Moon (Earth’s cosmic companion); Jupiter’s stripes and Pluto’s mountains; red dwarfs, brown dwarfs, and white dwarfs; the deaths of stars and the abundance of galaxies; and much more. Striking color images illustrate astrophysical marvels.
Jillian Scudder, an astrophysicist, is Assistant Professor of Physics at Oberlin College. Her writing on science has appeared in Forbes, Medium, The Conversation, the Independent, and Quartz.
"A cosmic journey that I enjoyed."—Brian Clegg, Popular Science

"This book serves as a terrific Astro 101 course for the discerning newcomer [...] I highly recommend this."—Peter Tyson, Sky & Telescope