Unearthing the Changes: Recently Discovered Manuscripts of the "Yi Jing" ( "I Ching") and Related Texts (Translations from the Asian Classics) (Hardcover) 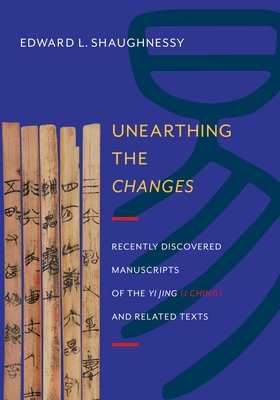 Unearthing the Changes: Recently Discovered Manuscripts of the "Yi Jing" ( "I Ching") and Related Texts (Translations from the Asian Classics) (Hardcover)

In recent years, three ancient manuscripts relating to the Yi jing (I Ching), or Classic of Changes, have been discovered. The earliest--the Shanghai Museum Zhou Yi--dates to about 300 B.C.E. and shows evidence of the text's original circulation. The Guicang, or Returning to Be Stored, reflects another ancient Chinese divination tradition based on hexagrams similar to those of the Yi jing. In 1993, two manuscripts were found in a third-century B.C.E. tomb at Wangjiatai that contain almost exact parallels to the Guicang's early quotations, supplying new information on the performance of early Chinese divination. Finally, the Fuyang Zhou Yi was excavated from the tomb of Xia Hou Zao, lord of Ruyin, who died in 165 B.C.E. Each line of this classic is followed by one or more generic prognostications similar to phrases found in the Yi jing, indicating exciting new ways the text was produced and used in the interpretation of divinations.

Unearthing the Changes details the discovery and significance of the Shanghai Museum Zhou Yi, the Wangjiatai Guicang, and the Fuyang Zhou Yi, including full translations of the texts and additional evidence constructing a new narrative of the Yi jing's writing and transmission in the first millennium B.C.E. An introduction situates the role of archaeology in the modern attempt to understand the Classic of Changes. By showing how the text emerged out of a popular tradition of divination, these newly unearthed manuscripts reveal an important religious dimension to its evolution.

Edward L. Shaughnessy is the Creel Distinguished Service Professor of Early China at the University of Chicago. He is the author of Rewriting Early Chinese Texts and Before Confucius: Studies in the Creation of the Chinese Classics; translator of I Ching, The Classic of Changes: The First English Translation of the Newly Discovered Second-Century B.C. Mawangdui Texts; and coeditor of The Cambridge History of Ancient China: From the Origins of Civilization to 221 B.C.