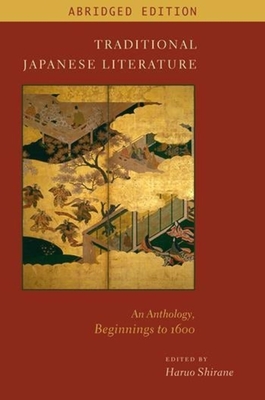 
Usually Ships in 1-5 Days
Haruo Shirane's critically acclaimed Traditional Japanese Literature: An Anthology, Beginnings to 1600, contains key examples of both high and low styles of poetry, drama, prose fiction, and essays. For this abridged edition, Shirane retains substantial excerpts from such masterworks as The Tale of Genji, The Tales of the Heike, The Pillow Book, the Man'yoshu, and the Kokinshu. He preserves his comprehensive survey of secular and religious anecdotes (setsuwa) as well as classical poems with extensive commentary. He features no drama; selections from influential war epics; and notable essays on poetry, fiction, history, and religion. Texts are interwoven to bring into focus common themes, styles, and allusions while inviting comparison and debate. The result is a rich encounter with ancient and medieval Japanese culture and history. Each text and genre is enhanced by extensive introductions that provide sociopolitical and cultural context. The anthology is organized by period, genre, and topic--an instructor-friendly structure--and a comprehensive bibliography guides readers toward further study. Praise for Traditional Japanese Literature: An Anthology, Beginnings to 1600

"Haruo Shirane has done a splendid job at this herculean task."--Joshua Mostow, University of British Columbia "A comprehensive and innovative anthology.... All of the introductions are excellent."--Journal of Asian Studies

"One of those impressive, erudite, must-have titles for anyone interested in Asian literature."--Bloomsbury Review

"An anthology that comprises superb translations of an exceptionally wide range of texts.... Highly recommended."--Choice

"A wealth of material."--Monumenta Nipponica
Haruo Shirane is Shincho Professor of Japanese Literature and Culture at Columbia University. His books include Japan and the Culture of the Four Seasons: Nature, Literature, and the Arts; Envisioning The Tale of Genji: Media, Gender, and Cultural Production; Traditional Japanese Literature: An Anthology, Beginnings to 1600; Early Modern Japanese Literature: An Anthology, 1600-1900; Classical Japanese: A Grammar; Traces of Dreams: Landscape, Cultural Memory, and the Poetry of Basho; and The Bridge of Dreams: A Poetics of the Tale of Genji.