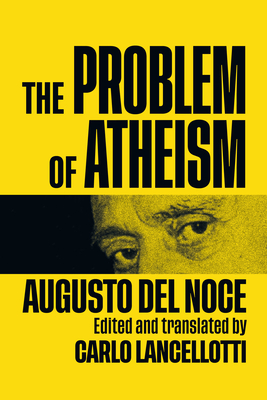 
Difficult to Find
In 1964, Augusto Del Noce assembled in a book some of his best works on Marxism, atheism, and the history of modern philosophy. The result was Il problema dell’ateismo, which he always regarded as foundational to his way of thinking. The book remains his best-known work and is still in print in Italy almost sixty years later. The Problem of Atheism offers the first English translation of this landmark book, one of the earliest works to recognize the new secularizing trends in Western culture following World War II. Del Noce situates atheism historically, reconstructing its philosophical trajectory through European modernity. Documenting the author’s entire intellectual experience, these essays explore the birth of modern philosophy, reckon with the great European crisis of 1917 to 1945 and the Cold War that followed, and mine the opposition between Marxism and the rise of the affluent society. The result is rich with premonitions of the cultural landscape that would take shape throughout the 1960s and the decades that followed. Proving its English translation to be long overdue, The Problem of Atheism remains relevant to contemporary debates about secularization, political theology, and modernity.
Augusto Del Noce (1910–1989) was professor at La Sapienza University of Rome and a distinguished philosopher, political thinker, and public intellectual. Carlo Lancellotti is professor at the College of Staten Island of the City University of New York.