Written on Bamboo and Silk: The Beginnings of Chinese Books and Inscriptions, Second Edition (Hardcover) 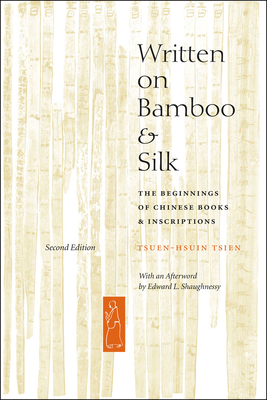 Written on Bamboo and Silk: The Beginnings of Chinese Books and Inscriptions, Second Edition (Hardcover)


Difficult to Find
Paleography, which often overlaps with archaeology, deciphers ancient inscriptions and modes of writing to reveal the knowledge and workings of earlier societies. In this now-classic paleographic study of China, Tsuen-Hsuin Tsien traces the development of Chinese writing from the earliest inscriptions to the advent of printing, with specific attention to the tools and media used. This edition includes material that treats the many major documents and ancient Chinese artifacts uncovered over the forty years since the book’s first publication, as well as an afterword by Edward L. Shaughnessy.Written on Bamboo and Silk has long been considered a landmark in its field. Critical in this regard is the excavation of numerous sites throughout China, where hundreds of thousands of documents written on bamboo and silk—as well as other media—were found, including some of the earliest copies of historical, medical, astronomical, military, and religious texts that are now essential to the study of early Chinese literature, history, and philosophy. Discoveries such as these have made the amount of material evidence on the origins and evolution of communication throughout Chinese history exceedingly broad and rich, and yet Tsien succeeds in tackling it all and building on the earlier classic work that changed
Tsuen-Hsuin Tsien is a professor emeritus of Chinese studies and curator emeritus of the East Asian Library at the University of Chicago. He is the author of Paper and Printing.


"Tsien's study is a triumph of modern sinology. . . . Few, if any, of the purposes, techniques, usages, instruments, and materials of Chinese writing have escaped his attention. The result is a volume which is as definitive as extent research data will permit."
— Library Journal

"This admirable monograph covers the whole field of epigraphy and the technique of human communication, including the origins and development of paper and the use of it for writing, down to the time of the invention of printing."

"For any student of Chinese, Tsien's lucid introduction to the development of the book, to the beginnings of calligraphy and the massive archive of historical writing, characteristic of premodern China, is an essential reference work."

"For scholars wishing to understand how a number of now justly separated palaeographic fields have developed over the past half-century, Tsien's re-editing of a classic work could not be timelier."