God, Knowledge, and the Good: Collected Papers in the Philosophy of Religion (Hardcover) 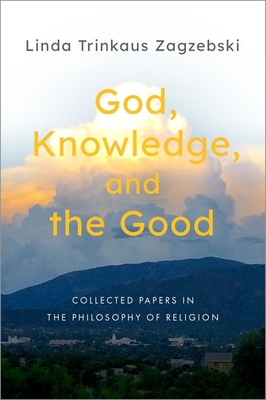 God, Knowledge, and the Good: Collected Papers in the Philosophy of Religion (Hardcover)


Usually Ships in 1-5 Days
This volume collects the published articles in philosophy of religion by the pre-eminent philosopher Linda Trinkaus Zagzebski. The volume focuses on the major themes of her career, which is reflected in the sections of the volume: 1) Foreknowledge and Fatalism, 2) The Problem of Evil, 3) Death, Hell, and Resurrection, 4) God and Morality, 5) Omnisubjectivity, 6) The Rationality of Religious Belief, 7) Rational Religious Belief, Self-Trust, and Authority, and 8) God, Trinity, and the Metaphysics of Modality. A companion volume to Epistemic Values, her collected articles in epistemology, this volume will be an important resource for scholars in the philosophy of religion, religious epistemology, and religious ethics.

Linda Trinkaus Zagzebski has contributed more than thirty-five years of books and papers in epistemology, philosophy of religion, virtue epistemology, and virtue ethics. Her most recent book, The Two Greatest Ideas, is an original narrative of the history of ideas. She taught for twenty years at Loyola Marymount University in Los Angeles, and then for 21 years at the University of Oklahoma. She has had many endowed lectureships, including the Gifford Lectures, the Wilde Lectures, the Soochow Lectures. She is a Guggenheim Fellow and has had fellowships from the National Endowment for the Humanities and the Templeton Foundation. She is Honorary Professor in the School of Divinity, University of St. Andrews, Scotland, and Honorary Doctor in the Department of Theology, University of Uppsala, Sweden.