Harvest of Empire: A History of Latinos in America (Paperback) 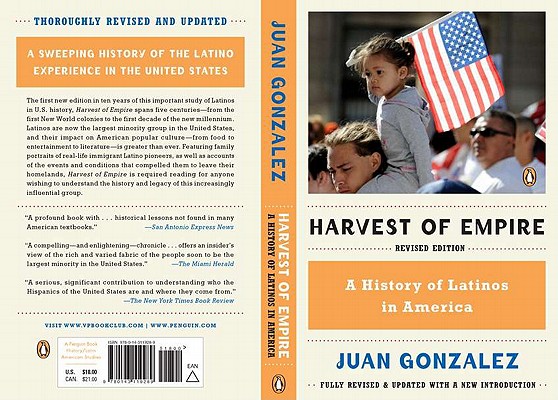 Harvest of Empire: A History of Latinos in America (Paperback)


Difficult to Find
A sweeping history of the Latino experience in the United States- thoroughly revised and updated.

The first new edition in ten years of this important study of Latinos in U.S. history, Harvest of Empire spans five centuries-from the first New World colonies to the first decade of the new millennium. Latinos are now the largest minority group in the United States, and their impact on American popular culture-from food to entertainment to literature-is greater than ever. Featuring family portraits of real- life immigrant Latino pioneers, as well as accounts of the events and conditions that compelled them to leave their homelands, Harvest of Empire is required reading for anyone wishing to understand the history and legacy of this increasingly influential group.
Juan Gonzalez is one of this country s best-known Latino journalists. He was a staff columnist for New York s Daily News from 1987 to 2016 and has been a co-host since 1996 of Democracy Now! He is the author of Harvest of Empire, News for All the People, Fallout, and Reclaiming Gotham. Born in Ponce, Puerto Rico, he was raised in East Harlem and Brooklyn, New York."
"A serious, significant contribution to understanding who the Hispanics of the United States are and where they came from." --The New York Times Book Review

"Required reading, not simply for Latinos but for everyone." --Kansas City Star