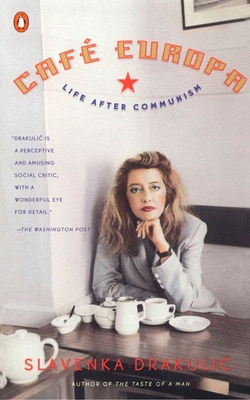 
Usually Ships in 1-5 Days
“Slavenka Drakulic is a journalist and writer whose voice belongs to the world.” —Gloria Steinem

Today in Eastern Europe the architectural work of revolution is complete: the old order has been replaced by various forms of free market economy and de jure democracy. But as Slavenka Drakulic observes, "in everyday life, the revolution consists much more of the small things—of sounds, looks and images." In this brilliant work of political reportage, filtered through her own experience, we see that Europe remains a divided continent. In the place of the fallen Berlin Wall there is a chasm between East and West, consisting of the different way people continue to live and understand the world. Little bits—or intimations—of the West are gradually making their way east: boutiques carrying Levis and tiny food shops called "Supermarket" are multiplying on main boulevards. Despite the fact that Drakulic can find a Cafe Europa, complete with Viennese-style coffee and Western decor, in just about every Eastern European city, the acceptance of the East by the rest of Europe continues to prove much more elusive.
Slavenka Drakulic was born in Croatia in 1949. The author of several works of nonfiction and novels, she has written for The New York Times, The Nation, The New Republic, and numerous publications around the world.
"Insightful... This book not only helps to illuminate the political and social problems facing much of Eastern Europe, but also sheds new light on the daily life of its residents, their emotional habits, fears and dreams." —The New York Times

"Drakulic is a perceptive and amusing social critic, with a wonderful eye for detail." —The Washington Post