One Leg Too Few: The Adventures of Peter Cook & Dudley Moore (Paperback) 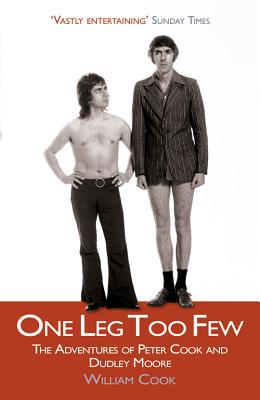 One Leg Too Few: The Adventures of Peter Cook & Dudley Moore (Paperback)

The first full-length dual biography of Peter Cook and Dudley Moore, and the first to be written with the consent and cooperation of both of their estates

This is a book about an extraordinary relationship: a friendship, a partnership—almost, at times, a marriage. Like a lot of marriages it ended badly, but for nearly 20 years, between the first date and the inevitable divorce, Peter Cook and Dudley Moore were the funniest thing on three continents.They were Britain's greatest double act, and their influence is immense. They inspired several generations of comics, from Monty Python to Ricky Gervais, and they were stars in America and Australia. Yet their partnership fell apart when they were barely in their forties. Dudley went to Hollywood and became an unlikely sex symbol, while Peter remained in England, his occasional striking cameo punctuated by increasingly long periods of semi-retirement. This is the story of their relationship, and the comedy that came from it. It features an extensive range of fresh interviews, previously unpublished archive material, and a wealth of information about the most creative (and explosive) double act that British comedy has ever produced.

William Cook is the acclaimed author of The Comedy Store, Ha Bloody Ha, and two collections of Peter Cook's writing. He has worked for the BBC and written for the Guardian, the Mail on Sunday, and the New Statesman.