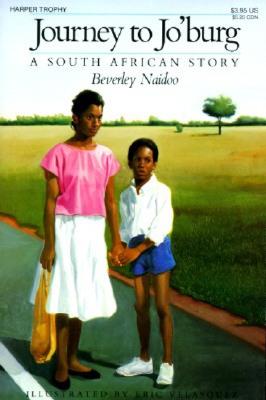 The bestselling classic set in South Africa during the apartheid era, in which two siblings must face the dangers of their divided country. This middle grade novel is an excellent choice for tween readers in grades 7 to 8, especially during homeschooling. It’s a fun way to keep your child entertained and engaged while not in the classroom.

Mma lives and works in Johannesburg, far from the village thirteen-year-old Naledi and her younger brother, Tiro, call home. When their baby sister suddenly becomes very sick, Naledi and Tiro know that they need to bring their mother back in order to save their sister’s life. Bravely, secretly, they set off on the long journey to the big city to find Mma.

It isn’t until they finally reach Jo’burg that they see up close what life is like for black citizens across South Africa—and begin to really question the unfair and dangerous laws of apartheid.

Beverley Naidoo grew up in South Africa under apartheid. She says: "As a white child I didn't question the terrible injustices until I was a student. I decided then that unless I joined the resistance, I was part of the problem." Beverley Naidoo was detained without trial when she was twenty-one and later went into exile in Britain, where she has since lived.

Her first children's book, Journey to Jo'burg, was banned in South Africa until 1991, but it was an eye-opener for thousands of readers worldwide. Her characters in Chain of Fire, No Turning Back, and Out of Bounds face extraordinary challenges in a society she describes as "more dangerous than any fantasy." She has won many awards for her writing, including the Carnegie Medal, the Jane Addams Book Award, and the American Library Association Best Book for Young Adults for The Other Side of Truth, about two refugee children smuggled to London who are also featured in Web of Lies.

Eric Velasquez has illustrated numerous children’s books, including Strong Voices: Fifteen American Speeches Worth Knowing and Schomburg: The Man Who Built a Library by Carole Boston Weatherford. He won the Pura Belpré Award for his illustrations in Grandma’s Gift. He won the John Steptoe New Talent Award for his illustrations in The Piano Man, written by Debbi Chocolate. Visit his website at www.ericvelasquez.com.

“A provocative, eloquent story about the human spirit.”
— Publishers Weekly