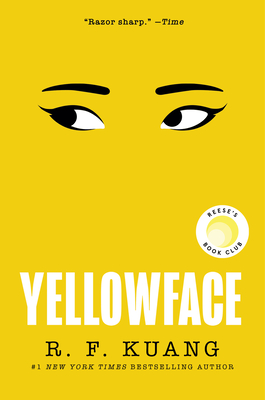 What’s the harm in a pseudonym? Bestselling sensation Juniper Song is not who she says she is, she didn’t write the book she claims she wrote, and she is most certainly not Asian American—in this chilling and hilariously cutting novel from the #1 New York Times bestselling author R. F. Kuang in the vein of White Ivy and The Other Black Girl.

Authors June Hayward and Athena Liu were supposed to be twin rising stars: same year at Yale, same debut year in publishing. But Athena’s a cross-genre literary darling, and June didn’t even get a paperback release. Nobody wants stories about basic white girls, June thinks.

So when June witnesses Athena’s death in a freak accident, she acts on impulse: she steals Athena’s just-finished masterpiece, an experimental novel about the unsung contributions of Chinese laborers to the British and French war efforts during World War I.

So what if June edits Athena’s novel and sends it to her agent as her own work? So what if she lets her new publisher rebrand her as Juniper Song—complete with an ambiguously ethnic author photo? Doesn’t this piece of history deserve to be told, whoever the teller? That’s what June claims, and the New York Times bestseller list seems to agree.

But June can’t get away from Athena’s shadow, and emerging evidence threatens to bring June’s (stolen) success down around her. As June races to protect her secret, she discovers exactly how far she will go to keep what she thinks she deserves.

With its totally immersive first-person voice, Yellowface takes on questions of diversity, racism, and cultural appropriation not only in the publishing industry but the persistent erasure of Asian-American voices and history by Western white society. R. F. Kuang’s novel is timely, razor-sharp, and eminently readable.

Rebecca F. Kuang is a Marshall Scholar, Chinese-English translator, and the Astounding Award-winning and the Hugo, Nebula, Locus, and World Fantasy Award nominated author of the Poppy War trilogy and the forthcoming Babel. Her work has won the Crawford Award and the Compton Crook Award for Best First Novel. She has an MPhil in Chinese Studies from Cambridge and an MSc in Contemporary Chinese Studies from Oxford; she is now pursuing a PhD in East Asian Languages and Literatures at Yale.

"Yellowface is brilliant satire--thought provoking, thrilling, and hitting a little too close to home. A must read commentary on the line between representation and exploitation and those who are willing to cross it for fame. Everyone in publishing's wide orbit should read this, and take a long look in the mirror." — Vaishnavi Patel, New York Times Bestselling Author

"YELLOWFACE is a spicy, satirical page-turner that skewers the racism and tokenization in the publishing and entertainment industries, the vanity of social media, and the lengths at which people will go to remain in the glaring spotlight."  — Tracey Lien, author of All That's Left Unsaid

"There’s SO MUCH I recognised (with the odd full-body cringe) about the vagaries of publishing and the ego bin fire of being a writer and SO MUCH I learned about my own white privilege but above all it’s a funny, engrossing read about what people do when they reckon they can get away with it." — Erin Kelly, author of The Skeleton Key

"A darkly satirical thriller about greed, truth, identity, and art—and who a story really belongs to. Reading Yellowface was like riding a roller coaster with no safety belt. I screamed the whole way through!" — Peng Shepherd, author of The Cartographers

“Babel has earned tremendous praise and deserves all of it. It’s Philip Pullman’s The Golden Compass by way of N.K. Jemisin’s The Fifth Season: inventive and engaging, passionate and precise. Kuang is fiercely disciplined even when she’s playful and experimental … Like the silver bars at its heart—like empires and academic institutions both—Babel derives its power from sustaining a contradiction, from trying to hold in your head both love and hatred for the charming thing that sustains itself by devouring you.” — New York Times Book Review

“A fantastical takedown of 19th-century imperialism that’s as meaty as its title. R.F. Kuang proved her prowess at blending history and magic with her debut series, The Poppy War, and she’s done it once again in this sweeping novel that blends historical fantasy and dark academia…If, as Babel suggests, words contain magic, then Kuang has written something spellbinding.” — Oprah Daily