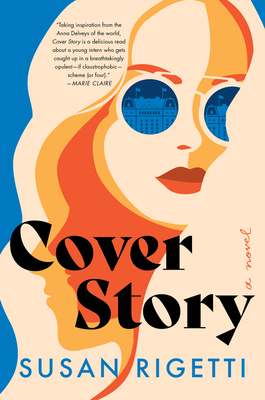 Netflix’s Inventing Anna and Hulu’s The Dropout meets Catch Me If You Can in this captivating novel about an ambitious young woman who gets trapped in a charismatic con artist’s scam.

After a rough year at NYU, aspiring writer Lora Ricci is thrilled to land a summer internship at ELLE magazine where she meets Cat Wolff, contributing editor and enigmatic daughter of a clean-energy mogul. Cat takes Lora under her wing, soliciting her help with side projects and encouraging her writing.

As a friendship emerges between the two women, Lora opens up to Cat about her financial struggles and lost scholarship. Cat’s solution: Drop out of NYU and become her ghostwriter. Lora agrees and, when the internship ends, she moves into Cat’s suite at the opulent Plaza Hotel. Writing during the day and accompanying Cat to extravagant parties at night, Lora’s life quickly shifts from looming nightmare to dream-come-true. But as Lora is drawn into Cat’s glamorous lifestyle, Cat’s perfect exterior cracks, exposing an illicit, shady world.

A whip-smart and delightfully inventive writer, Susan Rigetti brilliantly pieces together a perceptive, humorous caper full of sharp observations about scam culture. Composed of diary entries, emails, FBI correspondence, and more, Cover Story is a fresh, fun, and wholly original novel that takes readers deep into the codependency and deceit found in a relationship built on power imbalance and lies.

Susan Rigetti is an author, screenwriter, and the former technology op-ed editor at the New York Times. She has been named a “Person of the Year” by TIME, The Financial Times, and the Webby Awards, and has appeared on Fortune’s “40 Under 40” list, Vanity Fair’s New Establishment List, Marie Claire’s New Guard list, the Bloomberg 50, the Upstart 50, the Recode 100, and more. She is the author of a book on computer programming that has been implemented by companies across Silicon Valley, and the critically acclaimed memoir, Whistleblower.

“It’s Catch Me if You Can meets Sweetbitter, from the woman who blew the whistle on Uber’s software engineering team—what’s not to love?” — Entertainment Weekly

“[A] page-turner that’s hilarious in its dedication to vamping on viral news stories about real-life strivers and cons from Delvey to Instagram personality Caroline Calloway … a delicious read.” — TIME magazine

“Taking inspiration from the Anna Delveys of the world, Cover Story is a delicious read about a young intern who gets caught up in a breathtakingly opulent—if claustrophobic—scheme (or four).” — Marie Claire

“Rigetti's fiction debut has a roller-coaster plot that gives off huge Anna Delvey vibes and an ending that will leave you with your jaw on the floor…. If you're a fan of tales about scams, grifters, and mysterious schemes, Cover Story needs to be on your TBR list.” — Popsugar

“Cover Story is a good read … man oh man, it’s got suites at the Plaza, the FBI closing in, Russian hackers, designer clothes and a plot that stays ahead of the reader. Rigetti has written a need-to-read story.”
— San Francisco Chronicle

“A clever epistolary novel with an elegant con woman at its center—in other words, perfect escapism for this moment.” — Seattle Times

“Inspired by the stories of Anna Sorokin, Caroline Calloway, and others, Cover Story is a captivating novel that readers won’t be able to put down.”  — Shondaland

“Journalist Rigetti's debut kicks off beach-read season with a bang…. Drawing heavy inspiration from the true story of Anna Delvey, who conned New York's elite for several years in the mid-2010s, this book will be a must-read for the legions who followed Delvey's story with bated breath.… It’s The Devil Wear’s Prada meets Gone Girl, and it’s delightful.” — Booklist (starred review)

“Cover Story by Susan Rigetti is an unforgettable tale of scams and double-crosses told through emails, diary entries, and FBI correspondence.” — Popsugar

“I just loved Susan Rigetti's Cover Story, which is an insightful, tense story that's exactly what you want from a twisty thriller about a hustler (think Anna Delvey) who isn't what she appears.” — Linda Holmes, New York Times bestselling author of Evie Drake Starts Over

“This juicy tale of stolen identities and ever-increasing fraud, set against a tony Manhattan backdrop, is told entirely through original documents—Instagram posts, FBI transcripts—that place the reader in the role of detective. But even self-styled Poirots won't see what's coming: the book ended with a wallop that made me literally gasp—and admire debut author Susan Rigetti's sure-handed, inventive page-turner all the more.” — Stephanie Clifford, New York Times bestselling author of Everybody Rise

"The grifter gets a glow up in Susan Rigetti’s crafty caper. Devilish, innovative, and lightning-paced, Cover Story is like an internet rabbit hole you can hold in your hands. What fun!" — Lauren Mechling, author of How Could She

“Cover Story is pure delight from its deceptively sweet start to its shocking finish—an ingénue tale unlike any I've read before. I audibly gasped at the end. Unpredictable, satisfying, and full of surprises." — Mary Adkins, author of Palm Beach

“A cleverly constructed caper which beneath its charming exterior keenly examines grifter culture, the power dynamics of friendship, and the allure of the American dream. A deeply satisfying read which perfectly reflects today’s society.” — Kathy Wang, author of Impostor Syndrome

“Every con woman needs a mark, and Susan Rigetti's clever telling of the friendship between sweet, naïve, ambitious Lora and the probably sociopathic Cat Wolff is a con woman/mark relationship for the ages. Cat may have seduced Lora, but Cover Story seduced me.” — Doree Shafrir, author of Thanks for Waiting and Startup

“A breathless ride through a New York City of starving writers, glamorous con women, fashion magazines, and luxury hotels, Cover Story is irresistible and impossible to put down, a fast-paced tale of what we are willing to risk to make our dreams come true.” — Iris Martin Cohen, author of The Little Clan

"Wow, I have to untangle my brain after reading this book! Rigetti's debut novel is compulsively readable and FUN. Well-crafted and irresistible, this caper will have readers gasping!" — Elissa R. Sloan, author of The Unraveling of Cassidy Holmes