The Secret of Glendunny: The Haunting (Hardcover) 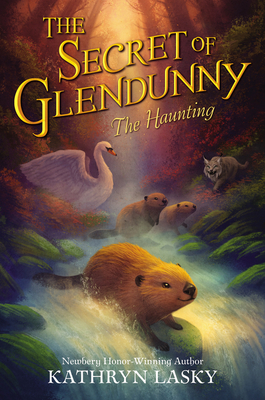 The Secret of Glendunny: The Haunting (Hardcover)

Newbery Honor–winning Kathryn Lasky, author of the bestselling Guardians of Ga’Hoole and Bears of Ice series, delivers a sweeping middle grade animal adventure with loyal beavers, a cultured swan, and ominous lynxes around every turn—a captivating story about heroism, loyalty, and the courage to speak truth to power.

"Draws readers deeply into a mystical world and leaves them wishing for more." —Kirkus (starred review)

“Themes of belonging and friendship are well conveyed… as are the complexities of this industrious world of creatures.” —Publishers Weekly

Deep in the wilds of Scotland, land of ancient warrior kings and myths, there is a deep secret. The secret is a colony of beavers, a species that is craved for their fur pelts, but vilified for what humans consider to be the destruction of their land. No beaver has been spotted in Scotland or England for over five hundred years, until the young beaver, Dunwattle, is sighted!

Dunwattle’s flight is driven by the presence of a ghostly figure, a figure of a mysterious young girl who is almost one thousand years old. And now Dunwattle is destined to be destroyed for revealing the hidden colony, but his best friend Locksley is determined to save him. Will their ancient beaver colony survive?

Kathryn Lasky is a New York Times bestselling author of many children’s and young adult books, which include her Tangled in Time series; her bestselling series Guardians of Ga’Hoole, which was made into the Warner Bros. movie Legend of the Guardians: The Owls of Ga’Hoole; and her picture book Sugaring Time, awarded a Newbery Honor. She has twice won the National Jewish Book Award, for her novel The Night Journey and her picture book Marven of the Great North Woods. She lives in Cambridge, Massachusetts, with her husband. www.kathrynlasky.com

“It’s a marvelous adventure, and Lasky's gorgeous text has a proper, old-fashioned tone that lends gravity to the fantastical plot. There is an astonishingly detailed mythology, language, and history to the beaver world, and larger, relevant themes of immigration and racism are organically worked in… an enchanting introduction to a wonderful, new natural world.” — Booklist (starred review)

“Themes of belonging and friendship are well conveyed… as are the complexities of this industrious world of creatures.”  — Publishers Weekly