The Stars Did Wander Darkling (Hardcover) 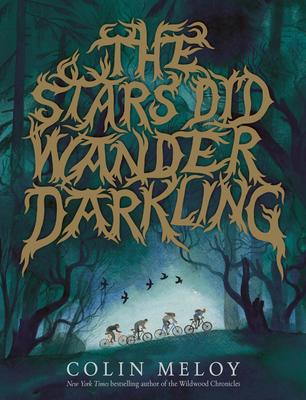 The Stars Did Wander Darkling (Hardcover)

“Very creepy and fun. I will recommend this to middle schoolers who come to the store swearing they LOVE scary stuff. Any book with heroes wielding Cimmerian broadswords has my approval (if you know what those are, you should read this too).”
— Kristine Jelstrom-Hamill, Buttonwood Books and Toys, Cohasset, MA

Maybe Archie Coomes has been watching too many horror movies.

All of a sudden, the most ordinary things have taken on a sinister edge: a penny on a doormat. An odd man in a brown suit under a streetlamp. The persistent sound of an ax chopping in the middle of the night.

He keeps telling himself that this is Seaham, a sleepy seaside town where nothing ever happens. Or at least nothing did, until his dad’s construction company opened up the cliff beneath the old—some say cursed—Langdon place.

Soon, though, he and his friends can’t deny it: more and more of the adults in town are acting strangely. An ancient, long-buried evil has been unleashed upon the community, and it’s up to the kids to stop it before it’s too late. . . .

Colin Meloy is the author of The Whiz Mob and the Grenadine Kid and the New York Times bestselling Wildwood Chronicles as well as two picture books, The Golden Thread: A Song for Pete Seeger and Everyone’s Awake. He is also the singer and songwriter for the indie rock band the Decemberists. Colin lives in Oregon with his wife and frequent collaborator, illustrator Carson Ellis, and their sons.

"Meloy expertly teases out the suspense to foster an atmosphere of otherworldly mystery…with authentic chills and splashes of gore. The friendship between the four main characters drives it all, much like in Stranger Things and Stand by Me, ensuring readers’ hearts are engaged as much as their adrenaline." — Booklist (starred review)

"In this aesthetically eerie novel... evoking 1980s adventures such as The Goonies, and referencing horror flicks of various eras via the town’s resident sage—owner of a Betamax-only video store—Meloy constructs an oddly ambiguous menace within a nostalgic summertime adventure involving cinematic chase sequences, uncanny occurrences, and psychological unease." — Publishers Weekly