The Turtle of Michigan: A Novel (Paperback) 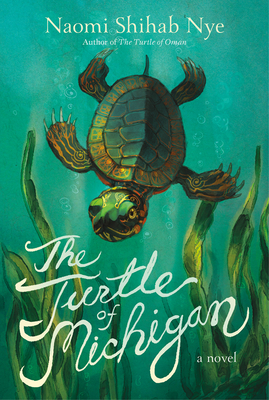 The Turtle of Michigan: A Novel (Paperback)

The stand-alone companion to National Book Award Finalist and beloved poet Naomi Shihab Nye’s The Turtle of Oman. The Turtle of Michigan is a deft and accessible novel that follows a young boy named Aref as he travels from Muscat, Oman, to Ann Arbor, Michigan, and adjusts to a new life and a new school in the United States. A wonderful pick for young middle grade readers and fans of Kevin Henkes, Erin Entrada Kelly, and Meg Medina.

Aref is excited for his journey from Oman to the United States, where he will reunite with his father in Ann Arbor, Michigan. Aref makes a friend on an airplane, wonders what Michigan will be like, and starts school in the United States. While he does miss his grandfather, his Sidi, Aref knows that his home in Oman will always be waiting for him.

Award-winning author Naomi Shihab Nye’s highly anticipated sequel to The Turtle of Oman explores immigration, family, and what it means to feel at home. Carrying a suitcase and memories of Oman, Aref experiences the excitement and nervousness that accompany moving to a new home and new school. The Turtle of Michigan is a great choice for reading aloud as well as a perfect read-alone for younger middle grade readers.

Illustrated in black-and-white throughout.

Naomi Shihab Nye is a poet and anthologist and the acclaimed author of Habibi: A Novel and Sitti's Secrets, a picture book, which was based on her own experiences visiting her beloved Sitti in Palestine. Her book 19 Varieties of Gazelle: Poems of the Middle East was a finalist for the National Book Award. She has taught writing and worked in schools all over the world, including in Muscat, Oman. She lives in San Antonio, Texas.

“Transplanted from Oman to Michigan, an Arab boy adjusts to his new life while missing his beloved grandfather in this stand-alone companion to The Turtle of Oman. . . . Nye’s inimitable, poetic prose beautifully captures Aref’s emotions as he meets the challenges of international travel and adjusting to a new community and culture while worrying about Sidi. Seamlessly continuing Aref’s story but accessible to new readers, this novel deftly explores the meaning of home. . . . A humorous, sensitive, and poignant family-centered take on moving to a new country.” — Kirkus Reviews (starred review)

“Aref Al-Amri has finally packed his suitcase and is journeying from Oman to Michigan in this charming follow-up to Nye’s The Turtle of Oman. . . . Aref is just as curious, insightful, and enthusiastic as he was in the previous book, and after a ­period of adjustment, he begins to feel quite at home. If only his beloved grandfather, Sidi, would come to visit, then everything would be perfect. Nye’s imagery brings the snows and forests of Michigan to vivid life, and her characters nearly leap off the page with authenticity.” — School Library Journal (starred review)

“This long-awaited follow-up to The Turtle of Oman reunites readers with an eight-year-old boy named Aref from Oman. . . . This very gentle read captures Aref’s experiences in his new town of Ann Arbor, including as he attends his new, inclusive school. . . . Enjoyable as a standalone, this accessible read offers a comfortingly warm, joyful view of moving.” — Booklist

“Eight-year-old Aref embarks on a trip with his mother to reunite with his father in Ann Arbor. Sad to leave Oman but now excited to go to Michigan, Aref leans into his surprising lack of nerves, adjusting to his new life with enthusiasm. . . . The book is a pleasingly gentle episodic series following Aref’s mostly problem-free entry into his new life, focusing on the joy and adventure of a relocation. . . . The tone is light and the narration sprightly, capturing Aref’s . . . curiosity about the world around him.” — Bulletin of the Center for Children’s Books