The Alien Adventures of Finn Caspian #1: The Fuzzy Apocalypse (Paperback) 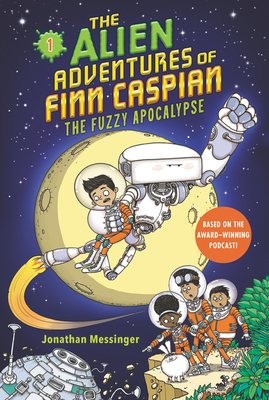 The Alien Adventures of Finn Caspian #1: The Fuzzy Apocalypse (Paperback)

This is book number 1 in the Alien Adventures of Finn Caspian series.

Explorer Troop 301 tries to save an exploding planet from a fluffy bunny and a devious alien in the first book of this funny, highly illustrated chapter book series based on the award-winning kids’ podcast!

Eight-year-old Finn is the first kid born in space and he spends his days looking for a new planet to call him with his three best friends and his robot, Foggy.

He’s used to wild, galaxy hopping adventures. But when Explorer Troop 301 gets stuck on a planet that’s about to explode, Finn and his friends will have to face giant aliens, a leader with mind control powers, and one evil, fluffy bunny rabbit in order to save the planet . . . and themselves.

Blast off into a brand-new adventure inspired by the popular award-winning kids’ podcast! Like the podcast, the books are sort of like Scooby-Doo meets Buffy the Vampire Slayer in space. The story centers on Finn Caspian, an 8-year-old boy aboard The Famous Marlowe 280 Interplanetary Exploratory Space Station. He and his friends Abigail, Elias, and Vale are Explorers Troop 301, taking off from the Marlowe to explore uncharted planets, help the occasional alien, and solve a mystery that threatens to destroy the Marlowe.

The books in this series are for kids ages 7 to 12 looking for a funny, illustrated story to tear through. They contain no violence, a little bit of suspense, and some aliens who are real chuckleheads...

Jonathan Messinger makes podcasts and books in Chicago, where he lives with his wife and two sons.

Aleksei Bitskoff is an Estonian-born character designer, illustrator, and animator who studied illustration at London College of Communication and then earned a master of arts degree in illustration from Camberwell College of Arts, University of the Arts London.

Praise for the podcast:  “So good that your parents won’t want to leave the room once they start.”  — New York Times

Praise for the podcast: “The addictive new science-fiction podcast for kids.”
— Chicago Tribune

"Witty and warm, and the subtle pokes at sci-fi tropes temper some of the more obvious messages about the importance of working together and respecting differences." — Bulletin of the Center for Children’s Books