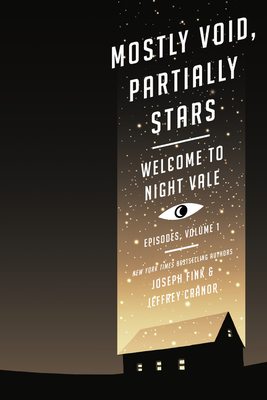 This is book number 1 in the Welcome to Night Vale Episodes series.

From the authors of the New York Times bestselling novel Welcome to Night Vale and the creators of the #1 international podcast of the same name, comes a collection of episodes from Season One of their hit podcast, featuring an introduction by the authors, behind-the-scenes commentary, and original illustrations.

In June of 2012, the creators of Welcome to Night Vale began airing twice-weekly podcasts. By the anniversary show a year later, the fanbase had exploded, vaulting the podcast into the #1 spot on iTunes. Since then, its popularity has grown by epic proportions, hitting more than 100 million downloads, and Night Vale has expanded to a successful live multi-cast international touring stage show and a New York Times bestselling novel. Now the first two seasons are available as books, offering an entertaining reading experience and a valuable reference guide to past episodes.

Mostly Void, Partially Stars introduces us to Night Vale, a town in the American Southwest where every conspiracy theory is true, and to the strange but friendly people who live there.

Mostly Void, Partially Stars features an introduction by creator and co-writer Joseph Fink, a foreword by Cory Doctorow, and behind-the-scenes commentary and guest introductions by performers from the podcast and notable fans, including Cecil Baldwin (Cecil), Dylan Marron (Carlos), and Kevin R. Free (Kevin) among others. Also included is the full script from the first Welcome to Night Vale live show, Condos. Beautiful illustrations by series artist Jessica Hayworth accompany each episode.

Mostly Void, Partially Stars is an absolute must-have whether you’re a fan of the podcast or discovering for the first time the wonderful world of Night Vale.

Joseph Fink is the creator of the Welcome to Night Vale and Alice Isn't Dead podcasts, and the New York Times bestselling author of Welcome to Night Vale, It Devours!, and The Faceless Old Woman Who Secretly Lives in Your Home (all written with Jeffrey Cranor), and Alice Isn’t Dead. He is also the author of the middle-grade novel, The Halloween Moon. He and his wife, Meg Bashwiner, have written the memoir The First Ten Years. They live together in the Hudson River Valley.

Jeffrey Cranor cowrites the Welcome to Night Vale and Within the Wires podcasts. He also cocreates theater and dance pieces with choreographer/wife Jillian Sweeney. They live in New York.

“Night Vale’s charm comes from the matter-of-factness with which it occupies the intersection between small-town slice-of-life and deep weirdness.” — Wired

“Like “A Prairie Home Companion” with LSD in its drinking water, this addictive, deeply weird podcast is for anyone who likes his or her quasi-radio listening with a surrealist tilt.” — Los Angeles Times

“Hypnotic and darkly funny, Welcome To Night Vale belongs to a particular strain of American gothic that encompasses The Twilight Zone, Stephen King and Twin Peaks, with a bit of Tremors thrown in.” — The Guardian