Golden Lion: A Novel of Heroes in a Time of War (Large Print / Paperback) 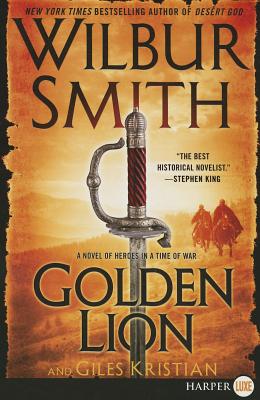 Golden Lion: A Novel of Heroes in a Time of War (Large Print / Paperback)

For readers of Game of Thrones, Ken Follett, and Clive Cussler:

courage, revenge, and everything in between.

He saw his father executed in battle. He spent his youth avenging that death. And now Henry 'Hal' Courtney is a man with a ship – and a family – of his own.

But fate has not finished with Hal. On a voyage along the eastern shore of Africa, a powerful enemy abducts his wife, the fearless warrior Judith… and with her, Hal's unborn child. For Hal, a man all too familiar with loss, there is only one way forward: He must track his nemesis across desert and ocean, through the slave markets of Zanzibar and the dangerous waters of the coast, in pursuit of the woman he loves, the child he sired, and the glorious destiny that awaits him.

Bursting with action and suspense, heroism and heartache, this unforgettable novel proves once more that Wilbur Smith is the world's greatest adventure writer.

Described by Stephen King as “the best historical novelist,” WILBUR SMITH made his debut in 1964 with When the Lion Feeds and has since sold more than 125 million copies of his books worldwide and been translated into twenty-six different languages. Born in Central Africa in 1933, he now lives in London.

“Best Historical Novelist--I say Wilbur Smith...You can get lost in Wilbur Smith and misplace all of August.” — Stephen King

“One of the world’s most popular adventure writers.” — Washington Post Book World

“I’ve been a fan of Wilbur Smith for the past three decades. Every new book is an event, a cherished time to get lost in ancient worlds.” — James Rollins, New York Times bestselling author of The 6th Extinction